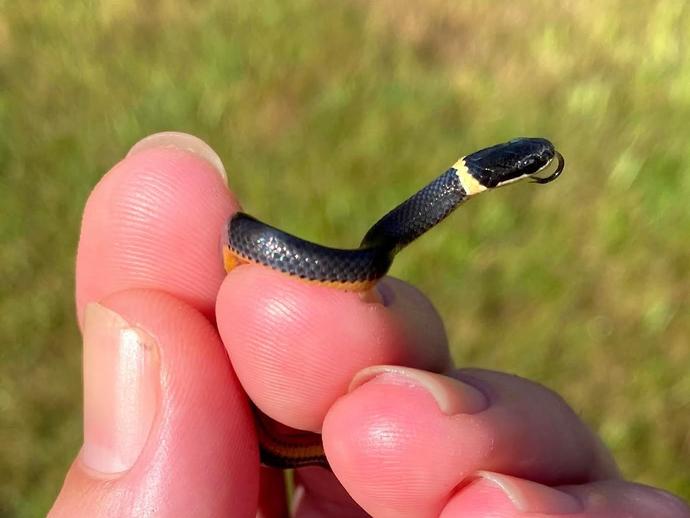 I was very excited when I found this snake in my bathroom last week, which is a statement that has probably never been typed before. This is a Diadophis punctatus edwardsii, the Northern ring-necked snake. It's one of 14 different subspecies of ring-necked snake!

Ring-necked snakes are nocturnal and secretive, so it's not entirely clear how common they are, but it's generally believed that they're fairly common. I find a couple around my house every year (although this was the first time I'd found one INSIDE the house). They generally tend to live under rocks, leaf litter, and fallen logs. They are also social, meaning that you might find several gathered in one spot. They tend to mate in the spring, and the females lay clutches of 2-10 eggs in early summer. The eggs hatch in late summer and the snakes hibernate through the winter.

These snakes eat insects, worms, slugs, and even small lizards, frogs, and other snakes. They're preyed upon by bullfrogs, some bird species, shrews, and even large centipedes and spiders, if the snake is a juvenile!

However, ring-necked snakes have a trick up their sleeve. In many subspecies, the underside of the tail is brightly colored, and if the snake feels threatened, it will coil its tail in an exaggerated way to distract predators from its head. However, according to the website of the Virginia Herpetological Society, this behavior hasn't been seen in the Northern ring-necked snake subspecies seen in the photo. #BenInNature

ABOUT #BENINNATURE
Social distancing can be difficult, but it presents a great opportunity to become reacquainted with nature. In this series of posts, Administrator of Science Ben Williams ventures outdoors to record a snapshot of the unique sights that can be found in the natural world. New updates are posted Monday - Friday, with previous posts highlighted on the weekends.