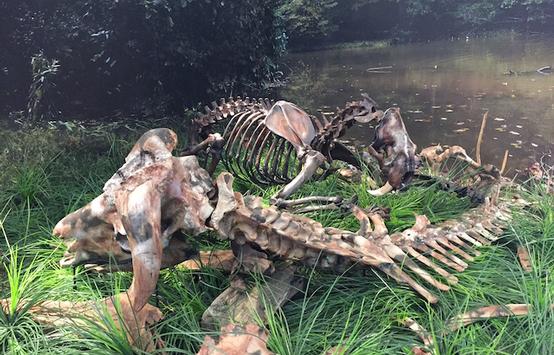 Through the museum’s casting and molding program, VMNH has re-created full-sized, skeleton casts of some of the most iconic creatures of the Pleistocene epoch, which ended approximately 11,700 years ago.  The exhibit. located in the Harvest Foundation Hall of Ancient Life, is highlighted by a saber-tooth cat (Smilodon), muskox (Bootherium), and giant beavers (Castoroides) depicted in carefully crafted scenes consisting of plant replications and insect life true to the time period.

Though Virginia’s climate was significantly cooler during the Pleistocene epoch than today, the climate was still warm enough to allow wildlife and vegetation to thrive.

Many people think of the planet as having been under one massive sheet of ice during the Ice Age, but in North America, the glaciers actually only came as far south as Pennsylvania and Ohio. At the time, temperatures were a lot cooler, but Virginia was still warm enough to allow life to flourish. While some iconic creatures of the latest ice age, such as the saber-tooth cat and wooly mammoth, are now extinct, many species of animals and plants that thrived during the last ice age continue to thrive today.

Virginia's landscape during the latest ice age was similar to what we see today in many ways. While we're fortunate not to have to scare off wooly mammoths from our front yards, many of the animals they once shared a habitat with are still a part of today's landscape.  However, some vegetation, such as pines and spruces, would have been far more common in the forests of Virginia’s Ice Age.

This exhibit is made possible by generous gifts provided by The Helen S. and Charles G. Patterson Jr. Charitable Foundation Trust and the Hermes Family Foundation.