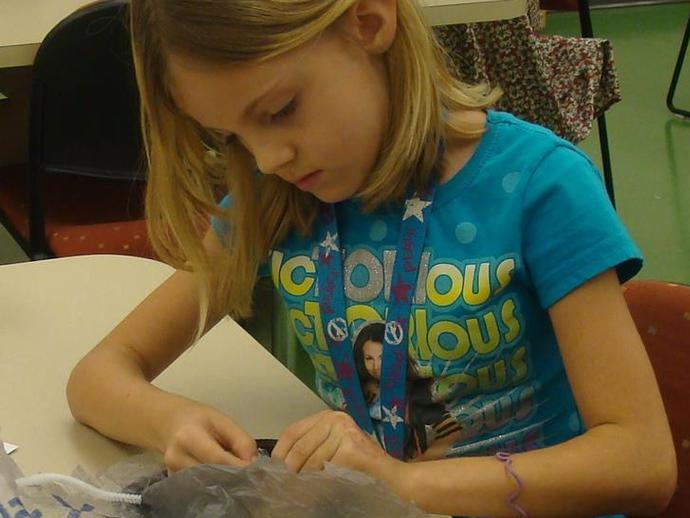 38 Girl Scouts from the Skyline Council of Virginia took part in a Virginia Museum of Natural History sleepover on October 12 - 13. The museum's sleepover program, which began soon after the opening of the new museum facility in 2007, has continued to grow in popularity over the years and can be tailored to fit the needs of many different civic, educational and private groups. If you or anyone you know is interested in the possibility of setting-up a museum sleepover for your group, please contact the museum at discover@vmnh.virginia.gov or call 276-634-4185 to find out more.

The most recent sleepover was the first STEM-centered (Science, Technology, Engineering and Math) sleepover conducted at the museum. After a pizza dinner, the scouts participated in a panel discussion on STEM careers with four representatives from local organizations including the Science, Engineering, Math, and Aerospace Academy (SEMAA) at Martinsville City Schools and New College Institute.

Ms. Helen Howell, director of the local chapter of the National Society of Black Engineers, and Ms. Laurie Witt of SEMAA led two challenging math, engineering, and space science activities, Passion for Pixels and Mars Rovers. The Passion for Pixels activity demonstrated how to send digital signals using grid paper and pencils. The Mars Rover activity challenged the girls to build the most inexpensive rover that would land safely on a rocky surface. Feedback from surveys given to the scout leaders indicated that the event raised awareness of gender equity in STEM fields and provided positive female role models for the girls.