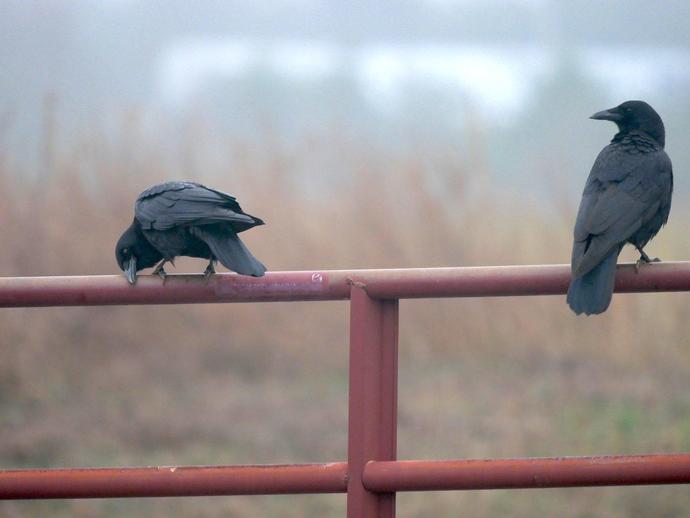 Ben here with another find from last week's VMNH Christmas bird count! The American crow (Corvus brachyrhynchos) certainly isn't a rare bird, and unfortunately, many people just don't like crows very much. However, crows are fascinating and intelligent birds that deserve our attention.

So just how smart are crows? Believe it or not, studies suggest that in some ways at least, a crow is as smart as a seven-year-old human child, and they might just be the smartest non-primate animal in the world.

Crows don't have exactly the same kind of intelligence as humans because they lack a neocortex, which is the part of the brain that humans and primates possess that allows for advanced cognition. Instead, crows (and other members of the Corvid family) have evolved dense areas of neurons in their brains that allow them a similar level of intelligence and problem-solving.

For example, crows can remember and identify human faces and even warn other crows about humans that are particular jerks! If you cross a crow, it will avoid you in the future. However, if you're nice to crows, they'll remember that too! There are countless stories about people who routinely feed crows and receive gifts in return in the form of shiny objects the crows have found in their travels. These gifts are usually things like screws and pieces of tinfoil, but that's pretty good for an animal that can't legally get a credit card! The theory behind gifting is that crows accidentally leave curious items behind while eating food left out by people, and when people respond to the items by providing more food, it conditions the crows to make the connection that leaving behind trinkets = tasty treats.

Additionally, crows have been confirmed to use tools. The New Caledonian crow (Corvus moneduloides) has been studied extensively in this regard. These crows use twigs to pry beetle grubs from crevices, and they'll even take a soft twig and bend one end into a hook to make a more efficient tool.

Perhaps the most impressive example of crow intelligence is the water displacement test. In one study, scientists tested multiple crows by presenting them with tubes containing a small amount of water with a food reward floating on top. The crows were presented with a number of objects that they could drop into the tube to cause the water level to rise, thereby allowing them to gain access to the treat. The crows not only figured out that they needed to use solid objects that would sink to raise the water level, but they also showed a preference for the tubes that would require the fewest stones to raise the water level, thereby requiring the least amount of work. Studies have shown that children ages four to six are unable to solve this same problem, while children ages 7-10 (and presumably older) are able to solve it.

All of this seems to suggest that not only are crows pretty smart, they're also kind of lazy and always looking for shortcuts. If that doesn't put them on par with the average human, I don't know what does! #BenInNature

NEW: TRIVIA CHALLENGE
You've seen the posts. You've learned the facts. Now, it's time to prove you are a #BenInNature Mega Fan! The museum's education team has developed the #BenInNature Trivia Challenge to identify the most devoted fans out there! Everyone who successfully answers each trivia question correctly will be congratulated by having your own nature selfie posted to the museum's #BenInNature Mega Fan Photo Album on the official VMNH Facebook page! Learn more and download the trivia challenge today by visiting http://www.vmnh.net/research-collections/beninnature-trivia-challenge.