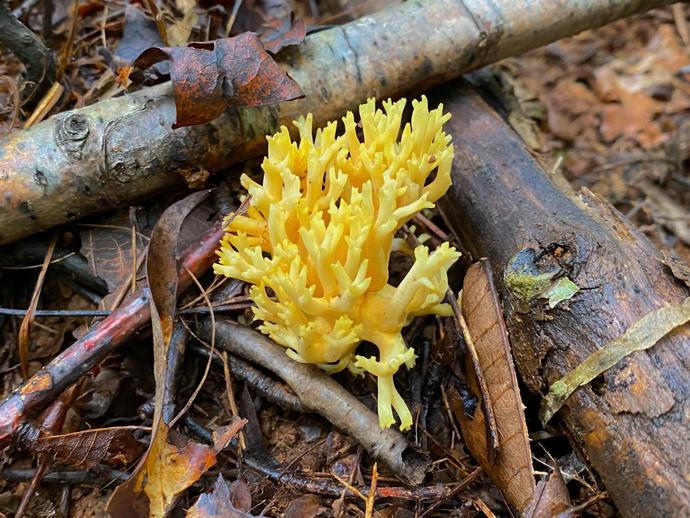 Ben here with Friday's #BenInNature update! When I first began noticing this strange fungus on my property, I thought to myself, "I wonder what that fungus is that looks like a coral." As it turns out, it's a coral fungus!

Coral fungi, also called clavarioid fungi, are generally studied as an informal group. It was originally believed that they all belonged to the same genus (Clavaria), but it turns out that even though many of them look quite similar, they aren't closely related. As I've mentioned before, I don't post a lot of fungi for the same reason I don't eat wild fungi: they can be really difficult to identify!

What coral fungi do have in common is that they produce simple or branching fruiting bodies and their spores are released from the sides of the fruiting bodies. When we see a mushroom, we usually think of the mushroom as being the entire organism; in fact, for most of the life cycle of a fungus, you won't even see it unless you go digging in the ground or leaf litter to find the mycelium (the roots, basically). When a fungus produces a fruiting body above the soil, its sole purpose is to spread spores to make new fungi.

Most coral fungi are saprotrophic, meaning they digest decaying organic material, while a few are ectomycorrhizal, meaning that they form a symbiotic relationship with the roots of living trees!

NEW: TRIVIA CHALLENGE
You've seen the posts. You've learned the facts. Now, it's time to prove you are a #BenInNature Mega Fan! The museum's education team has developed the #BenInNature Trivia Challenge to identify the most devoted fans out there! Everyone who successfully answers each trivia question correctly will be congratulated by having your own nature selfie posted to the museum's #BenInNature Mega Fan Photo Album on the official VMNH Facebook page! Learn more and download the trivia challenge today by visiting www.vmnh.net/research-collecti.../beninnature-trivia-challenge.