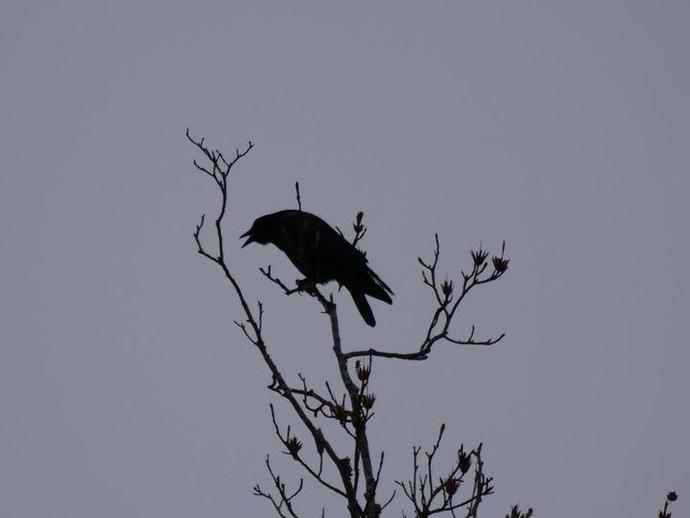 Ben here with Friday's edition of #BenInNature presented by our friends at Carter Bank & Trust!

The American crow (Corvus brachyrhynchos), seen here in mid-caw, is one of my absolute favorite birds! Sure, they're not much to look at, and they don't have a pretty song, and they're an agricultural pest, but crows have something most birds don't: smarts.

Just how smart are crows? While it's hard to measure an animal's intelligence in the same way we measure a human's, some scientists believe crows are about as smart as a seven-year-old child. For one thing, they can use tools. Crows have been observed using sticks to spear food items, and they will even bend wire to make hooks for obtaining food.

There's a famous Aesop fable called "The Crow and the Pitcher" about a crow that drops stones in a pitcher in order to raise the water level so it can take a drink. As it turns out, this is no fable; crows really are that smart. In an experiment, scientists observed crows dropping objects into a deep tube of water in order to obtain a treat floating on the surface. The crows only picked items that would sink to the bottom and displace the water. Remarkably, humans only understand the concept of volume displacement around the age of five!

And that's not all! Crows can recognize individual human faces, and if you're a mean to crow, it will remember you -- and it may even dive-bomb you the next time it sees you. In one experiment, scientists captured, tagged, and released some crows. When they returned to the site, they found that they were attacked by the crows that had been captured, but they were also attacked by crows they had not previously captured. A possible explanation for this is that crows are able to communicate with each other and warn each other of threats!

On a personal note, just last week I was sitting in my car eating lunch when I watched a crow walking across the parking lot. It had a hard pretzel in its beak, and I watched it walk over to a small puddle, dip the pretzel in the water a few times (presumably to soften it), and then eat it. As I dipped my french fry in some ketchup, I felt a certain kinship.