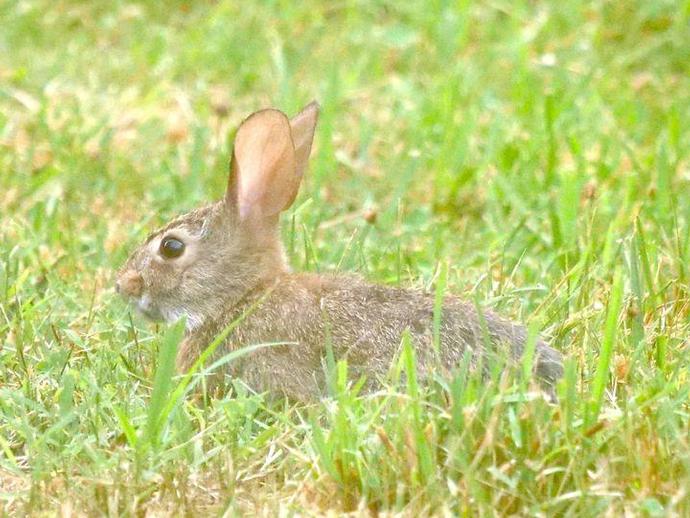 Ben here with the Friday edition of #BenInNature presented by our friends at Carter Bank & Trust!

This is the eastern cottontail Sylvilagus floridanus, and it's the most common rabbit species in North America. It can be found in every county in Virginia. For whatever reason, I've seen more of these guys on my property this year than I ever remember seeing before. There's even one living under my house! I have yet to see the first rent payment, though.

Eastern cottontails are mostly found in the eastern half of the U.S., although there are also some populations in the Pacific Northwest. Their range extends down into Mexico, Central America, and even the northernmost parts of South America. It originally was not found in New England, but it was introduced there and now competes for habitat with the native New England cottontail (Sylvilagus transitionalis).

Eastern cottontails are territorial and like to live in areas where they can be out in the open but also quickly find cover if threatened. Unfortunately for these adorable rabbits, they're threatened quite often; according to the Virginia Department of Wildlife Resources, they're probably the most heavily preyed upon game species in the Commonwealth. Rabbits make up as much as 50 percent of the diet of foxes, and they're also preyed upon by bobcats, coyotes, house cats, dogs, raccoons, skunks, weasels, owls, and hawks. If you're a predator in Virginia, chances are good that you enjoy rabbits!

During the spring and summer, rabbits eat a variety of plant material (and they're the bane of every gardener). During the winter when grasses and clover aren't available, they eat buds, twigs, bark, and any leftover grains they can find.

While eastern cottontail populations have declined over the last 50 years or so due to habitat loss, they can still be abundant in areas that provide a good habitat for them. If you'd like to increase the number of rabbits on your property, the best way to do it is by letting natural cover grow so they have places to hide from predators. Doing so will also attract pollinators!