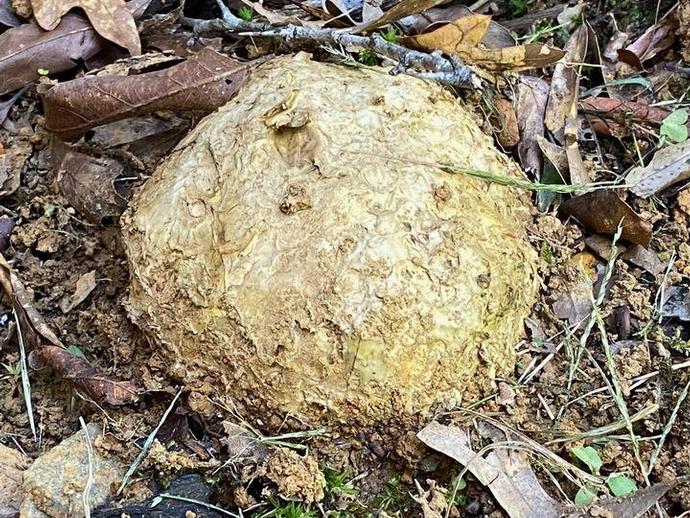 Ben here with the Monday edition of #BenInNature presented by our friends at Carter Bank & Trust!

This may look like an elderly baseball that had a traumatic experience, but it's actually a puffball mushroom!

Puffballs belong to several different genera of mushrooms, including Calvatia, Calbovista, and Lycoperdon. Given that this one was on its last legs when I found it, I'm hesitant to even hazard a guess at the species, but most puffballs are pretty similar in behavior.

What makes puffballs unique is the way they spread their spores (basically mushroom "seeds"). Most mushrooms have a cap with little gills underneath it that release the spores. In the case of puffballs, the spores are produced internally inside a spherical structure called a "gasterothercium." As the spores mature, they form a large mass called a "gleba." Eventually, an aperture opens in the mushroom, or the mushroom dries out and becomes brittle enough that a hole forms, and the spores are released.

I remember finding a mature puffball mushroom when I was a little kid; I touched it and watched the spores emerge, looking almost exactly like clouds of smoke! It's a very cool sight.

While some puffballs are edible, I encourage extreme caution when eating these or any mushrooms. Young puffballs look incredibly similar to the early stages of two of the most deadly mushrooms on Earth, the death cap and destroying angel mushrooms. I'd rather stick to the fungi at the grocery store.