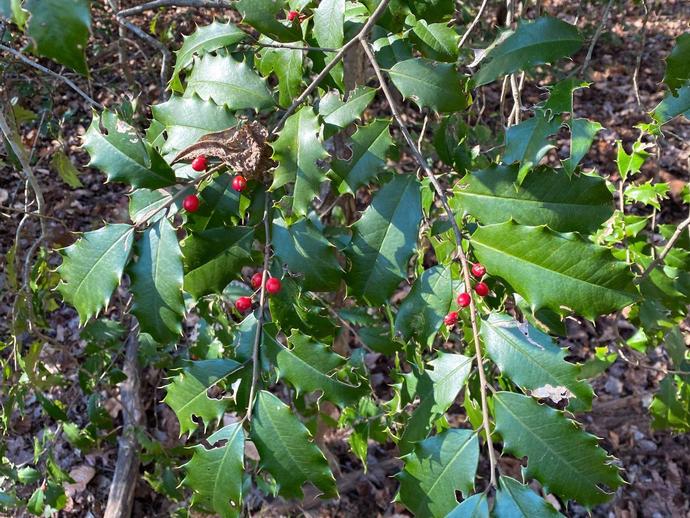 Ben here with the Thursday edition of #BenInNature! With its stiff, pointy leaves and bright red berries, the American holly (Ilex opaca) is one of our easiest native trees to identify. American holly is native to most of the southeastern United States, but it can be found outside its natural range due to its popularity as an ornamental plant. There are more than 1,000 different holly cultivars (varieties produced through selective breeding). Some cultivars have larger berries, others have yellow berries, and one cultivar called "Cobalt" can withstand temperatures as low as -25 F!

In the wild, American holly averages between 33-66 feet in height but can reach nearly 100 feet tall! All the trees in the holly family are dioecious, meaning that there are separate male and female plants. Only female hollies produce the characteristic red berries.

American holly is inextricably connected to Christmas, likely since the bright red berries don't mature until late in the season and remain on the tree well into the winter. Holly berries contain a bitter alkaloid known as ilicin that is poisonous to humans, but fortunately, they have to be consumed in fairly large quantities before they're particularly dangerous (and they taste so bitter and terrible that it's unlikely anyone would want to consume a dangerous amount). The symptoms of holly poisoning include nausea, vomiting, and diarrhea. The berries are not poisonous to birds, however, although cedar waxwings (Bombycilla cedrorum) are the only birds that seem to actually seek them out. For other birds, holly berries are a food of last resort, which is part of the reason why they stay on the trees well into the winter. You can consider holly berries nature's ramen noodles.