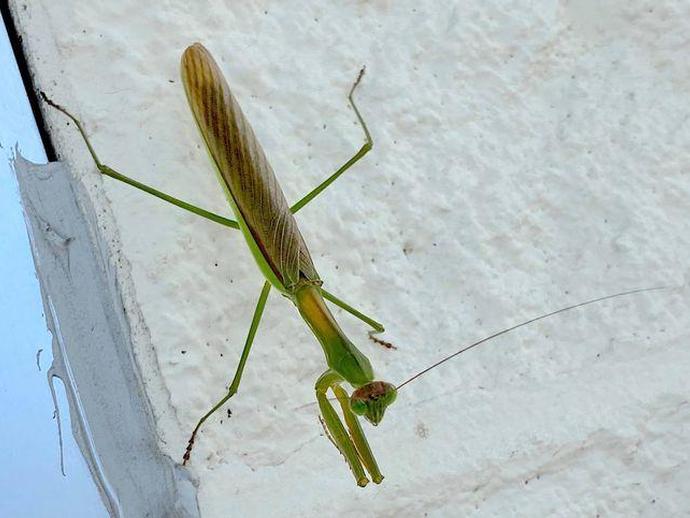 Ben here with the Thursday edition of #BenInNature presented by our friends at Carter Bank & Trust!

I was walking into a hardware store the other day when I saw this guy hanging out next to the front door. This is Tenodera sinensis, better known as the Chinese mantis!

The Chinese mantis is native to China, Japan, Korea, and other neighboring countries, but it was accidentally introduced to the U.S. in 1896 by an employee at a plant nursery near Philadelphia. Much like the European mantis (Mantis religiosa), it was later intentionally introduced in order to combat pest insects. If you've ever purchased a mantis ootheca (egg case) to release praying mantises into your garden, it was probably one of these two invasive species.

Chinese mantises are skilled predators, and they will feed on everything from insects and spiders to small reptiles and amphibians. In some rare cases, they will even eat hummingbirds! Unfortunately, it will also eat other mantids, including our native species like the Carolina mantis (Stagmomantis carolina) that are generally much smaller. Our native mantid species are in decline, and it's believed that one of the major factors is not just predation from invasive mantid species but also the inability to compete with these species for food. Speaking anecdotally, I find that I'm much more likely to find one of the invasive species out in the field than one of the native species.

If you're looking for an unusual pet, the Chinese mantis is said to make a great one! They adapt quickly to humans and after enough interaction will even allow hand-feeding!