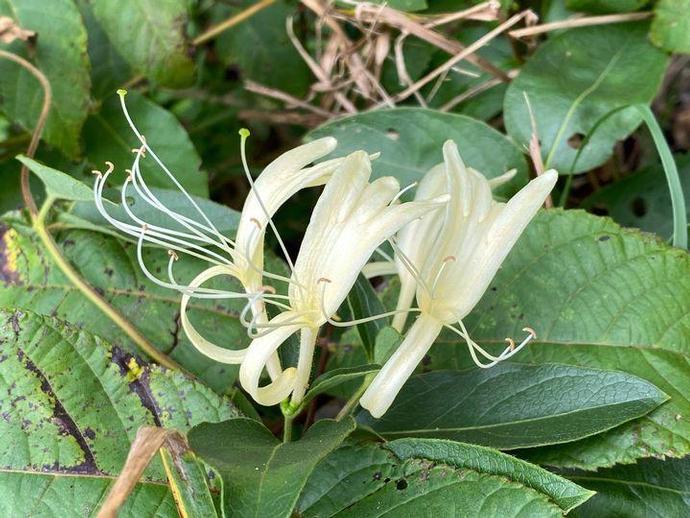 Ben here with the Thursday edition of #BenInNature presented by our friends at Carter Bank & Trust!

I remember being shown as a child how to pluck flowers from honeysuckle, pinch the rear of the flower in such a way as to cut through the flower without breaking the style, and then pull the style through the rear of the flower, drawing out a drop of delicious nectar with it. It's pretty tasty stuff (just make sure that the plants haven't been sprayed with any weed killer if you decide to try it yourself)!

As the name suggests, Japanese honeysuckle is native to eastern Asia but has since become an invasive species in a number of countries around the world. It's actually been classified as a "noxious weed" in Virginia and a few other states. Like many invasive species, honeysuckle was initially brought to the U.S. from Japan in the early 1900s to serve as an ornamental plant. It's still deliberately planted today to serve as an attractive erosion control and forage for deer.

While honeysuckle normally invades areas that have already been disturbed, such as roadsides and floodplains, it has the potential to invade forests, particularly if some amount of logging has taken place. Once it invades, it spreads rapidly, outcompeting native plants for sunlight and nutrients. While it may produce attractive and sweet-smelling flowers and seem like a nice addition to the garden, it's best to plant native species instead.