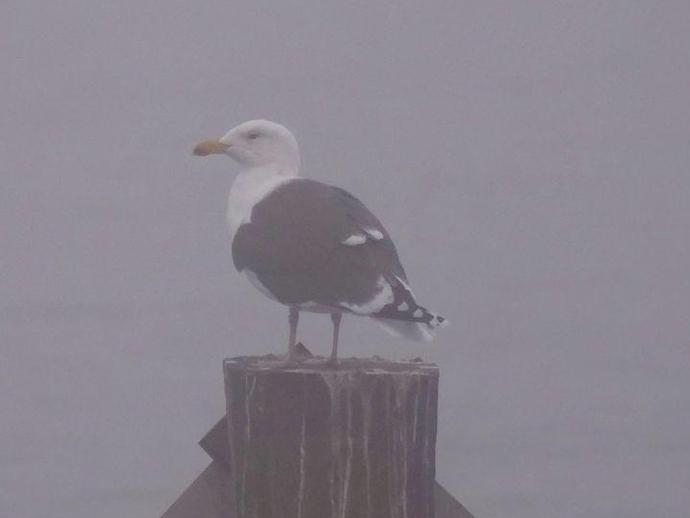 As I mentioned yesterday, I was in Norfolk a couple of weeks ago and photographed some shorebirds early one foggy morning. Today we're looking at the second one I spotted, the great black-backed gull (Larus marinus), the largest gull in the world!

The Cornell Lab of Ornithology describes this bird as "the king of the Atlantic waterfront." Personally, I thought that title belonged to Bally's Atlantic City Casino, but I suppose this majestic seagull also deserves the title. A full-size black-backed gull can have a wingspan of nearly six feet and weigh as much as five pounds!

The great black-backed gull has a wide range and can be found up and down the Atlantic coast, along the northern European coast, and on shorelines between those two points. Much like the ring-billed gull we looked at yesterday, these birds are opportunists and will eat just about anything they can fit in their mouths. They eat plenty of fish, but they also eat a great deal of garbage that's been helpfully provided by us humans.

Interestingly, these gulls are one of the few species that are highly predatory, and they will hunt and kill small prey. Since they lack the sharp beaks and pointy talons of hawks, eagles, and other birds of prey, they instead kill their quarry through their sheer strength and aggression.

Also like the ring-billed gull we looked at yesterday, these gulls were once harvested for their feathers. Fortunately, they're resilient birds and their populations have managed to bounce back, making them a common sight on the Atlantic coast.