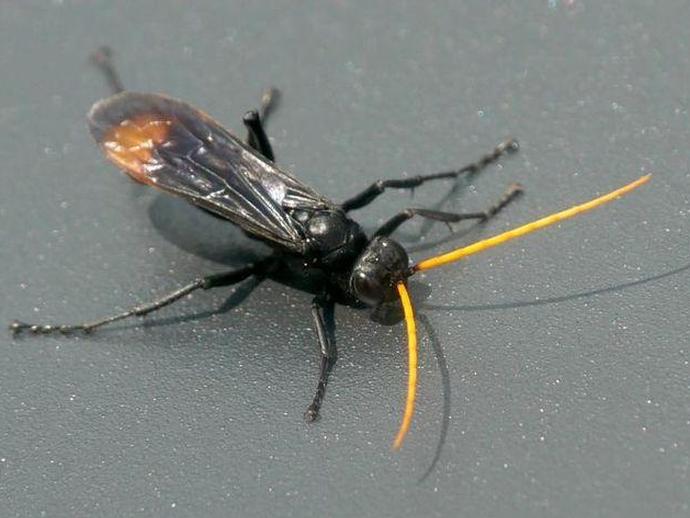 This is Entypus unifasciatus, and if you hate creepy crawlies, it presents a real dilemma: it's a wasp, but it hunts spiders!

Entypus unifasciatus is a spider wasp, which are also known as pompilid wasps (they belong to the family Pompilidae). There are more than 5,000 species in this family, and this one is the most common here in Virginia; in fact, it can be found throughout almost all of North America!

The females of this species are generally seen in late summer and early fall, and the adults don't feed on spiders themselves; they drink nectar from flowers. When the females find a large spider, they fly down and sting it, which paralyzes the spider. After that, they grab the spider by its "face" and drag it into a burrow, usually built in a crack in the ground or as an offshoot of a mammal's burrow. They lay an egg on the spider and fly away.

Once the egg hatches, the wasp larva feeds on it (usually while it's still alive!) and eventually transforms into a pupa. It will remain a pupa through the winter and then emerge the following the summer to continue the cycle.

These wasps are solitary, meaning they don't live in groups, and they're easy to identify based on their bright orange antennae and the smoky orange patch on their wings. They don't like to sting humans, but they will if they feel threatened. It's apparently pretty painful, so if you see a spider wasp out and about, it's best to just let it do its thing!