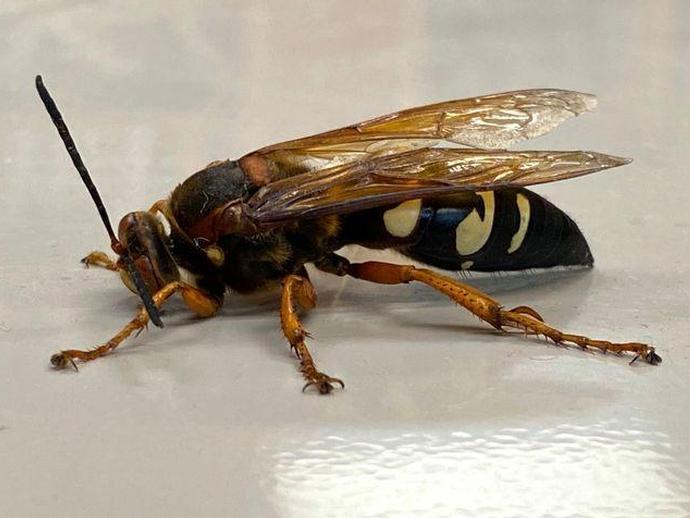 This is a critter that popped up on our VMNH Facebook feed a couple of weeks ago in an archived nature post from last summer, but I wanted to take a moment to highlight it again for two reasons. One, we spent last week looking at some common Virginia insects that are often mistaken for the dreaded Asian giant hornet (Vespa mandarinia), and this is certainly one of the most famous. Two, these are much better photos than I had last year!

This is Sphecius speciosus, better known as the eastern cicada killer. These are truly fascinating little animals. Cicada killers are digger wasps, and they can grow to be as much as two inches long! They need that extra bulk in order to tangle with their prey of choice: the annual cicada!

You're most likely to see cicada killers flying low to the ground to seek out good sites to build their burrows. They emerge in the summer and tend to die off in September or October. Once a female cicada killer has dug her burrow, she starts flying around trees and bushes to hunt for cicadas. When she finds one, she stings it in order to paralyze it, then holds it upside down beneath her and flies back to her burrow. It's not the easiest thing in the world; a cicada might weigh twice as much as the cicada killer wasp, and it's a slow, clumsy flight. Once the female has gathered one or two paralyzed cicadas and secured them inside her burrow, she lays her eggs. If she's laying a male egg, she'll lay it on a single cicada; if she's laying a female egg, she'll provide it with two or three cicadas, since the females of the species are much larger than the males.

The eggs hatch within days and the wasp larvae begin eating the immobilized but still alive cicadas. It takes them just two weeks to complete their development, and then the larvae build cocoons of dirt to surround themselves and protect them throughout the winter. In the spring, the larvae emerge from their cocoons and become pupa, then emerge from the ground as adults after about a month.

While cicada killers look intimidating, they're fairly harmless. The adults only eat flower nectar and they are not inclined to sting. As long as you don't grab one with your bare hands, it's unlikely you'll get stung, and even then, the sting is purported to be pretty mild (not that I want to test out that theory).