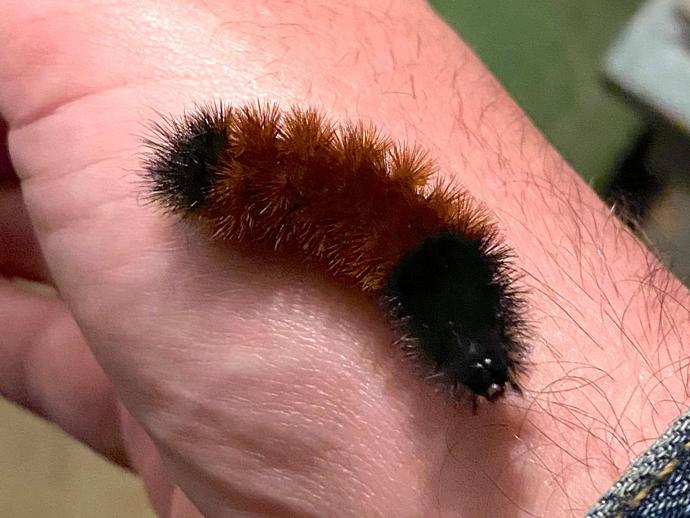 Ben here with the Wednesday edition of #BenInNature! As promised, today we're looking at the larval form of the isabella tiger moth (Pyrrharctia isabella), better known as the woolly bear or woolly worm! Even if you don't like bugs, you're probably a fan of these guys. In fact, a number of places in the U.S. hold annual woolly bear festivals! The nearest one is the Woolly Worm Festival held in Banner Elk, NC; sadly, it had to be cancelled this year due to the pandemic, but the organizers are planning on bringing it back next October.

So why are these little guys so popular? In addition to being cute and fuzzy (and non-venomous, although the hairs can irritate people with sensitive skin), woolly bear caterpillars are said to be able to predict the weather. According to folklore, the width of the caterpillar's brown band predicts how severe the winter weather will be: a wide brown band means a mild winter, while a narrow brown band means a harsh winter. It's also said that if you see one of these caterpillars crawling south, it means a severe winter is on its way.

Is this folklore true? Well... no. It's fun, though! In truth, even woolly bear caterpillars from the same clutch of eggs can have different banding, and the width of the brown band tends to increase each time the caterpillar molts.

A fun bonus story: I had been looking for one of these caterpillars for the last few weeks without much luck. This past Saturday, I had a few friends over (we were masked and socially distanced, of course). As my friend William was playing Super Mario Bros. 3, he felt a tickle on his neck that caused him to fumble the controls and send Mario to his death. A minute or so later, it happened again. Finally, William went fishing in his hoodie and hurled the pictured woolly bear caterpillar onto my couch. While the experience didn't do much for William, I was thrilled to have finally found my caterpillar!