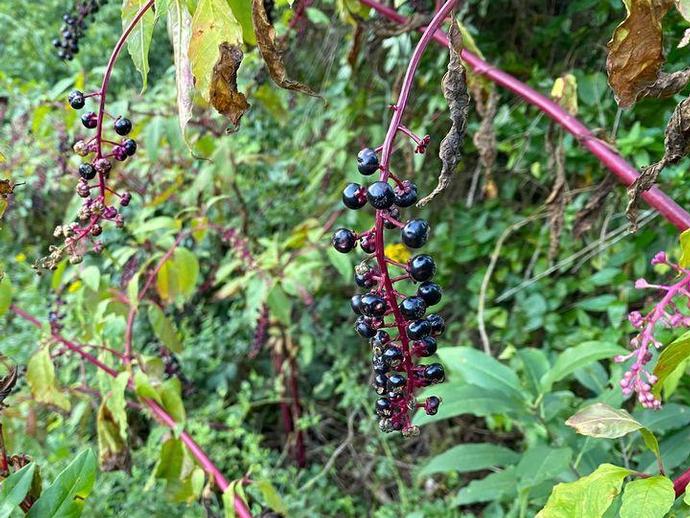 Phytolacca americana, better known as pokeweed, is one of our easiest native plants to identify -- and it's a good thing, too! While many people eat parts of the pokeweed plant, it can be extremely toxic if you don't know exactly what you're doing!

Pokeweed is native to the eastern U.S., the midwest, the Gulf Coast, and the west coast; it's also an introduced weed in Japan. It's most often found growing in pastures, edge habitats, along fences, and in wastelands and recently cleared areas. It grows quickly through the summer and is considered a pest species by farmers as it can poison dogs and livestock.

Despite its toxicity, pokeweed is considered a traditional Appalachian food. The leaves and stems of young plants (NOT mature ones) can be eaten, but they must first be boiled at least twice with the water drained each time. The leaves are supposed to taste like spinach, while the stems taste a bit like asparagus.

However, I advise against eating pokeweed because all parts of the plant are toxic; the toxins are most concentrated in the roots, then the leaves and stems, and finally the berries. The plant gets more toxic as it matures.

Unfortunately, children frequently suffer from pokeweed poisoning because they eat the berries. The toxins in pokeweed function as a slow-acting emetic and induce violent vomiting and even convulsions. In some cases, death can occur because the toxins cause paralysis of the lungs. While some folks still eat pokeweed, I advise sticking to regular old spinach and asparagus.