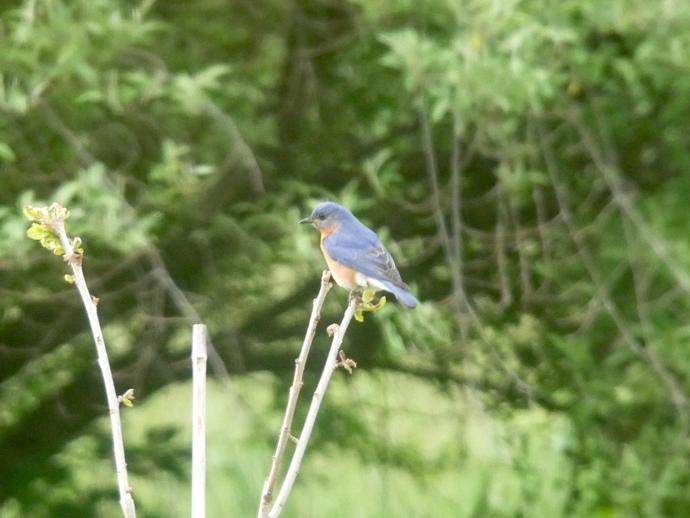 Ben is taking a well-deserved holiday vacation, so we're reaching into the archives for today's #BenInNature update! The following post was originally published on April 30, 2020.

The eastern bluebird (Sialia sialis), seen here perched on my newly-planted persimmon tree, is one of the great comeback stories of the conservation movement.

In the middle of the 20th century, vast amounts of farmland that bluebirds used to call home had been converted into housing and industry, and heavy pesticide use had put the bluebird at even more risk since insects make up a large portion of their diet. To make matters worse, European house sparrows (Passer domesticus) had been introduced to the U.S. in the 1800s in the hope that they would eat crop pests. As with most introduced species, they instead ended up outcompeting native species. Like bluebirds, house sparrows also prefer to build their nests inside hollow cavities in trees, and they would even drive bluebirds from their nests. As a result of all these factors, by 1970, the number of bluebirds in America was just ten percent of the normal population size!

It was around this time that public outcry hit a peak. After all, who doesn't love bluebirds? In 1970, New York named the eastern bluebird as the official state bird, and in 1982, the New York State Bluebird Society was formed to educate the public about bluebirds. The NYSBS started up a program to encourage folks to build nesting boxes for bluebirds to replace the tree cavities the birds had been displaced from, and the idea took off across the east coast. As a result of all this hard work, the eastern bluebird population has rebounded and is stable once again.

If you'd like to spot a bluebird, you have plenty of options. They're commonly spotted along fields, and they also show up in parks and backyards. Look at low-hanging branches or fence posts, as bluebirds like to perch and scan the ground for delicious bugs.

ABOUT #BenInNature
Social distancing can be difficult, but it presents a great opportunity to become reacquainted with nature. In this series of posts, Administrator of Science Ben Williams ventures outdoors to record a snapshot of the unique sights that can be found in the natural world. New updates are posted Monday - Friday, with previous posts highlighted on the weekends and the week of December 21 - 25.