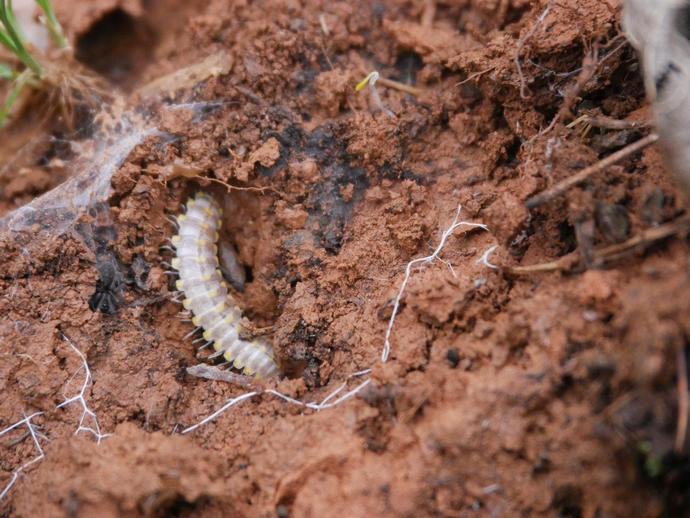 #BenInNature is on vacation! While he's out, we're going to look back at the first daily nature updates from way back in March! The following post was originally published March 27, 2020.

Yesterday, we talked about centipedes; today, we're going to talk about millipedes, the centipede's cool laid-back vegan cousin. According to myriapod expert Dr. Jackson Means, who is currently serving as a research technician at VMNH, this millipede is likely a juvenile Boraria stricta; once mature, it will have a dark black body with yellow spots to advertise its chemical defenses (this form of advertising is called "aposematism"). Those chemical defenses are no joke. If you ever pick up a similarly-colored millipede and smell it (look, we've all done it, there's no shame in it) you might notice that it smells a bit like almonds or cherries. That delicious aroma is created when the millipede releases hydrogen cyanide!

Fortunately, we humans don't have much to worry about, although individuals with sensitive skin may develop blisters if they don't wash their hands. Any rodents or birds that want to snack on a millipede, however, will deeply regret the decision (although not for very long). Some of our Appalachian millipedes produce 18 times the amount of cyanide needed to kill a pigeon! The aposematic black and yellow colors of the millipede advertise to predators that it's not worth the risk of eating it.

As mentioned yesterday, millipedes aren't voracious, swift-moving predators like centipedes. Instead, they take it slow, and they eat rotting plant material. A centipede's venomous pincers are actually modified forelegs. While millipedes don't have pincers, they do have a set of modified legs. On the seventh body segment of most millipedes, they have a pair of heavily modified legs called "gonopods." During mating, the male millipede uses its gonopods to transfer sperm to the female millipede. The complex structure of these gonopods is unique to each millipede species, which makes them incredibly useful for millipede researchers like Dr. Jackson Means. Appalachia has an incredible diversity of millipedes, with many unique species found only within a small area. Many of these species look remarkably similar, and the only way to differentiate them is by studying the unique structure of the gonopods under a microscope. #BenInNature