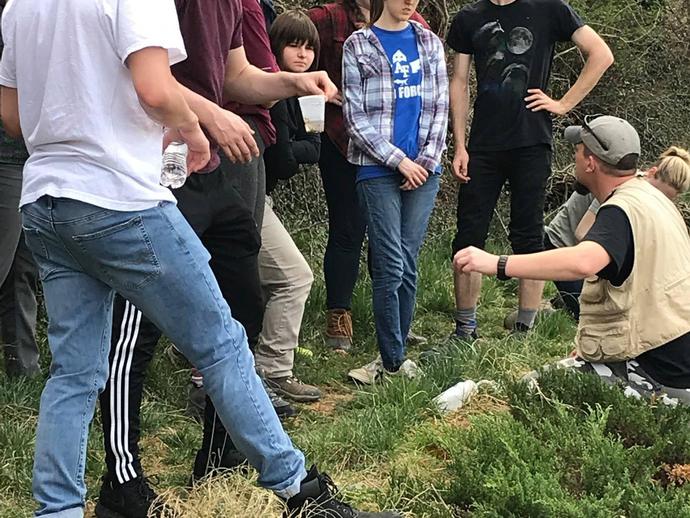 Curators and research technicians from the museum teamed-up with Roanoke College to present the training workshop "Capture and Curation Methods for Studying Terrestrial Animals". The day-long workshop gave participants hands-on training in the ways mammals and invertebrates are captured for scientific study and how they are prepared and curated as museum specimens for long-term preservation. Museum instructors also provided examples from their own research programs of how museum specimens are used to further our understanding of Virginia's fauna.

Most native mammals in Virginia are small, secretive, difficult to identify, and are active mostly at night. Therefore, the only effective method for studying many of these species is trapping. During the workshop, participants explored various methods of capturing mammals, while accompanying Dr. Moncrief as she checked previously set live traps. Participants also observed and photograph the animals they captured, and then released them where they were caught. Additionally, participants reviewed various other methods for studying mammals that do not require capture and handling.

Dr. Kal Ivanov, assistant curator of invertebrate zoology at the Virginia Museum of Natural History, led the invertebrate portion of the workshop. Dr. Ivanov's research focuses on the taxonomy, systematics and natural history of ants, but his interests also include biodiversity inventories, arthropod collecting techniques, community ecology and invasion biology.

Virginia's invertebrate fauna is not fully known but most of the 20,000 species expected to occur in the state are small, secretive and often difficult to find. Because they are small, and the majority cannot be identified without the examination of minute morphological characters, entomologists often make and maintain research collections. However, before the specimens make it into a research collection they have to be first captured.