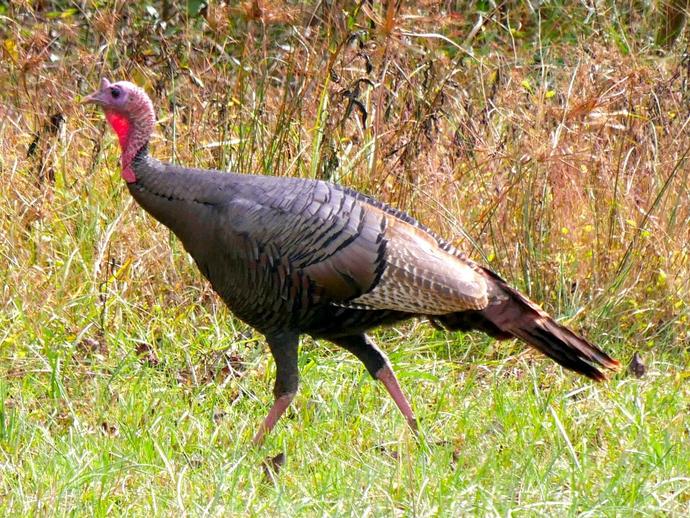 Happy Thanksgiving! What better way to celebrate than by taking a look at this female Eastern wild turkey (Meleagris gallopavo silvestris)? This subspecies of the wild turkey is the most common and wide-ranging of the six wild turkey subspecies in the U.S., and they're always an exciting sight! Believe it or not, the domesticated turkey on your table this evening belongs to the same species as the wild turkey. The majority of domesticated turkeys are bred to have white feathers because it makes their tiny pin feathers less visible when the turkey is dressed and ready to go in the oven (bon appétit!).

While wild turkeys aren't an uncommon sight in southwest Virginia, that wasn't always the case. When the Europeans first arrived in what would become the U.S., wild turkeys numbered in the millions. However, due to hunting and deforestation, their numbers plummeted. It's believed that by the late 1930s, there were just 30,000 wild turkeys in the U.S.! Thanks to careful management, however, their numbers began to significantly rebound, and today it's believed there are around seven million turkeys in the wild.

Wild turkeys are foragers and spend a lot of time pecking around for tree nuts, seeds, berries, and insects. They will also eat small reptiles and amphibians! You can most often spot them foraging in the early morning and late afternoon.

Despite their size, wild turkeys are actually pretty strong flyers! They tend to roost in trees at night because they have terrible night vision and can't see predators coming until they're right on top of them.

Lastly, there is a famous story that Benjamin Franklin argued that the wild turkey should be the national bird instead of the bald eagle (Haliaeetus leucocephalus). There is a bit of truth to this; in a 1784 letter to his daughter Sarah Bache, Franklin argued that the bald eagle is a bird of "bad moral character" because it routinely steals food from fishing hawks, while the turkey is "a much more respectable bird" that "would not hesitate to attack a Grenadier of the British Guards who should presume to invade his Farm Yard with a red Coat on." Despite his strong feelings, however, Franklin kept these thoughts between himself and his daughter; he never publicly suggested that the turkey should be the national symbol.

I'll be back on Monday, and in the meantime, I hope you and yours have a wonderful, safe Thanksgiving! #BenInNature