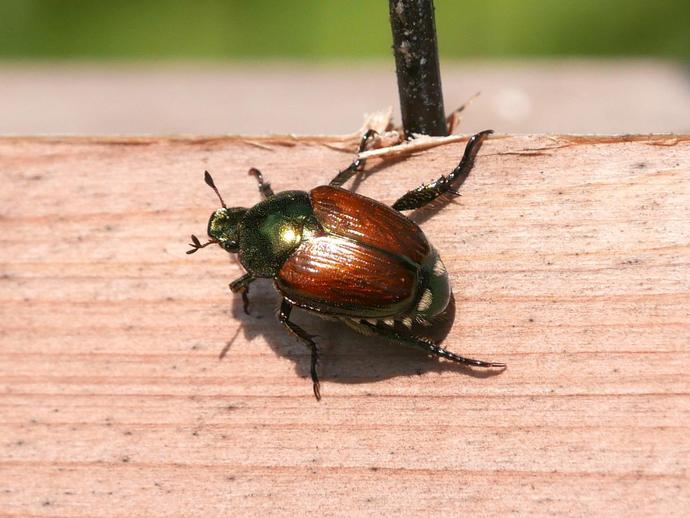 Here we see a Japanese beetle (Popillia japonica) quietly contemplating flying over to my long-suffering persimmon sapling to continue skeletonizing its leaves.

As the common name suggests, these beetles are native to Japan, and they're not terribly destructive in their home country because they're kept in check by natural predators. Elsewhere, however, these beetles are a menace to a wide variety of agricultural crops.

Japanese beetles were first discovered in the U.S. in 1916 at a nursery near Riverton, New Jersey. It's believed they were accidentally imported to the U.S. as stowaways in a shipment of iris bulbs a few years earlier. As of 2015, these beetles have spread to all but nine western states in the U.S., and they have been found in parts of Europe in recent years.

Larval Japanese beetles eat the roots of grasses, but the adults eat the foliage and fruits from a wide variety of crops, including corn, peas, okra, cherries, strawberries, beans, tomatoes, peppers, grapes ... it would probably be more efficient to list the crops they DON'T eat.

There are traps designed to lure these beetles in with pheromones and then capture them inside a bag, and it's certainly tempting to use them if your garden is under attack. However, studies have shown that these traps actually attract far more beetles than they capture, which only makes the situation worse. The best way to control Japanese beetles is with milky spore (Paenibacillus popilliae), a USDA-developed biological control that's widely commercially available. While it won't affect the adult beetles, treating your yard with milky spore will kill the grubs before they emerge as adults. Best of all, unlike pesticides, it has no effect on beneficial insects or animals! #BenInNature

This post brought to you by VMNH Corporate Supporter Everything Outdoors, LLC.