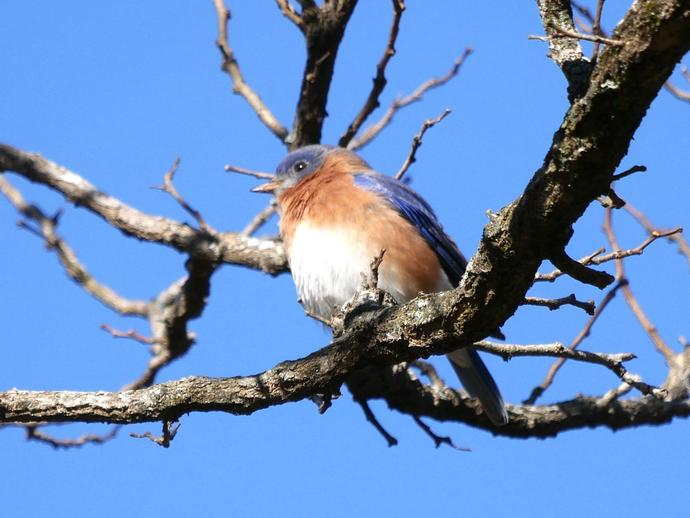 Hi folks, this is VMNH Administrator of Science Ben Williams! Last Monday, I joined several of my VMNH colleagues for our annual Christmas bird count. This eastern bluebird (Sialia sialis) is just one of 50 different species we spotted, and today through Friday, all of my nature posts will feature my favorite birds that I photographed during the count!

So what exactly is the Christmas bird count? According to VMNH Curator Emeritus of Geology and Walking Bird Encyclopedia Dr. Jim Beard, back in the 1800s and earlier, there used to be a very strange American tradition: on the day after Christmas, people would go out and shoot as many birds as they could find. Fortunately, about a century ago, The Audubon Society proposed a much better idea: what if instead of shooting birds, people just, you know, LOOKED at them and then wrote down what they saw? Thankfully, the idea caught on and the Christmas bird count was born!

Dr. Beard conducted official Audubon bird counts back in the 1990s, but these eventually tapered off; the counts were resumed in 2014, and while no count was conducted in 2015, they have taken place every year since. I've been fortunate to join the museum crew on all of the recent bird counts, and it's always a highlight of my holiday season (my bird identification skills are terrible, but I like to think I provide moral support and comic relief).

As mentioned, we spotted 50 different species of birds on Monday, Dec. 21, all of which were found between 7 a.m. and 4 p.m. within about a 15 mile radius of the city of Martinsville. Over the course of the week, I'll highlight my five favorite birds I was able to photograph, all of which have never before been featured in these daily nature posts. I hope you enjoy!