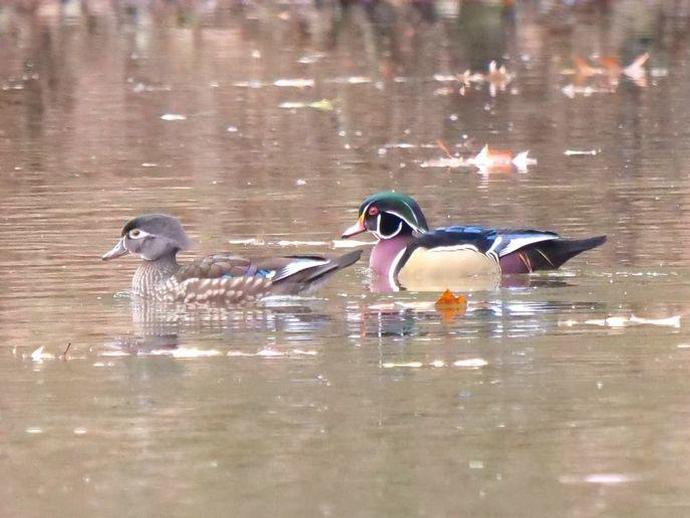 It's the last day of Duck Week here at #BenInNature, and I saved the best for last! Check out this pair of wood ducks (Aix sponsa)!

The female is on the left while the male is on the right. As you can see, male wood ducks are pretty stunning; they're one of our most colorful North American waterfowl. Also known as the Carolina duck, wood ducks can be found year-round in the southeastern U.S. and on the west coast. There are also northern populations that migrate south for the winter.

These ducks tend to live in wooded swamps, marshes, shallow lakes, and near ponds and creeks. They prefer to nest in tree cavities that are very close to water, although they'll also live in nesting boxes. Unlike many ducks, these guys have sharp claws that allow them to perch in trees. In the southern parts of their range, they'll sometimes produce two broods in a single season, and they're the only North American duck that can do so!

Wood ducks faced a serious decline in the late 1800s. Habitat loss played a major role, and they were also hunted extensively for both their meat and their feathers, which were used for women's hats. Fortunately, the U.S. Migratory Bird Treaty Act of 1918 ended unregulated hunting and helped protect their remaining habitat, and wood duck populations began to rebound fairly quickly. Thanks to conservation efforts, it seems that these beautiful ducks are here to stay.

ABOUT #BenInNature
In this series of posts, Administrator of Science Ben Williams ventures outdoors to record a snapshot of the unique sights that can be found in the natural world. New updates are posted Monday - Friday, with previous posts highlighted on the weekends. This series of posts is made possible thanks to the support of VMNH Corporate Partner Carter Bank & Trust (www.cbtcares.com).