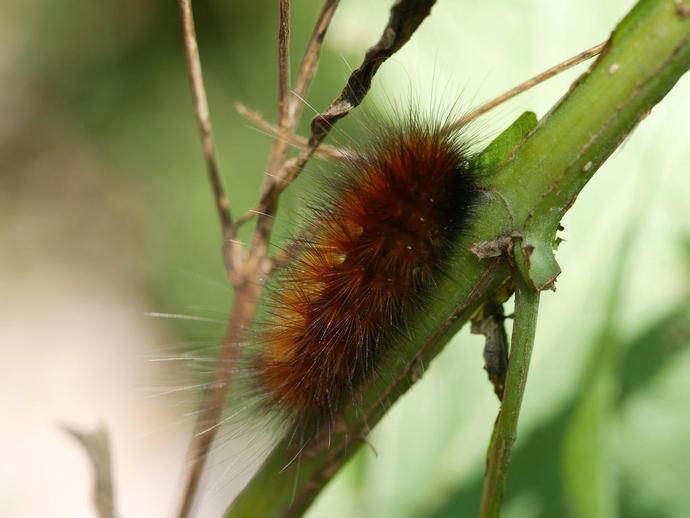 It's time for another #BenInNature update! When I found this little guy a month or so ago, I initially thought it was a woolly bear caterpillar. While the two are related (they're members of the same subfamily), this is actually the larvae of Spilosoma virginica, the Virginian tiger moth. The caterpillars are commonly referred to as "yellow woolly bear" or "yellow bear" caterpillars because they're often yellow in color, but they can also be brown like this one. Unlike the more familiar woolly bear caterpillars, however, they're generally consistent in their coloration; you won't find one that's half-yellow and half-brown, for example.

These moths have two or three life cycles per year, and their caterpillars eat the leaves of low-growing plants. They're not too picky, and they'll even eat a wide variety of weeds (if memory serves, I found this one on a wingstem [Verbesina alternifolia]). They don't usually appear in large numbers until late in the summer and into early fall, and they also tend to be pretty solitary, so you don't have to worry too much about these little guys messing up your garden.

Of course, if you're curious about the regular old woolly bear caterpillars -- the ones that are famously used by old-timers to predict the weather -- hang tight, because we'll be looking at one tomorrow!