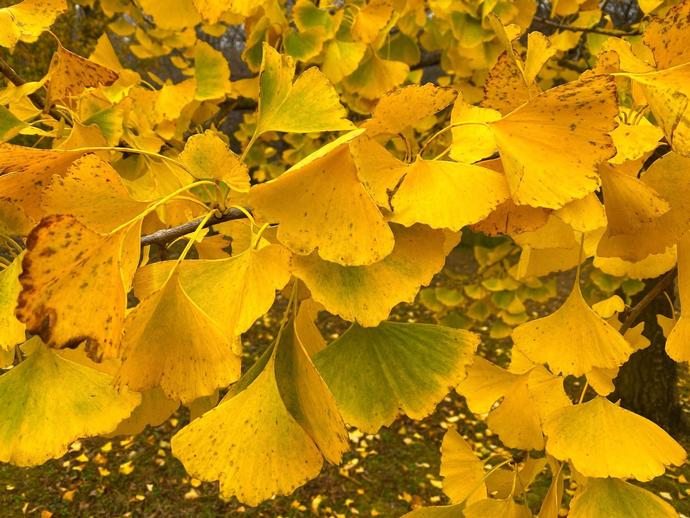 It's time for another #BenInNature update! My grandparents planted this ginkgo tree (Ginkgo biloba) behind their house more than 40 years ago. While ginkgo is not native to the U.S., it is a tree with a fascinating history!

Ginkgo biloba is not just the only living tree in its genus; it's the only living tree in its order! Without going into too much (truly fascinating) detail about plant taxonomy, this means that the ginkgo tree is one-of-a-kind. It's also a so-called "living fossil." Ginkgo biloba and other trees within the Ginkgo genus were once found throughout the world, but over time, the number of species and their range began to shrink. By two million years ago, there was just one species, and it was restricted to a small area in China.

The ginkgo has been widely cultivated, however, and it can be found not only in China but throughout the U.S. and Europe. You might have even noticed a couple of ginkgo trees next to the museum! As much as it has been planted as an ornamental, however, the ginkgo tree has never really become naturalized outside of southern China, meaning that ginkgo trees in the U.S. and Europe don't reproduce enough to maintain their population. This is probably a good thing because naturalization is how we get invasive species.

When it comes to reproduction, ginkgo trees are dioecious, meaning that there are two separate sexes (and on rare occasions, male trees will become female and vice versa!). If you decide to plant some ginkgos on your property, be warned that it takes as long as 20 years to determine the tree's sex, and female trees produce seeds containing butyric acid, which smells truly atrocious.

Ginkgo has also long been used in traditional medicine, and in recent decades ginkgo extract has been sold as a dietary supplement said to improve memory. While there have been mixed results generated from studies examining whether ginkgo can slow the onset of Alzheimer's, there is unfortunately no evidence that it improves the memory of otherwise healthy people. It can also potentially have some negative health effects, so it might be best to leave the ginkgo extract on the store shelf.