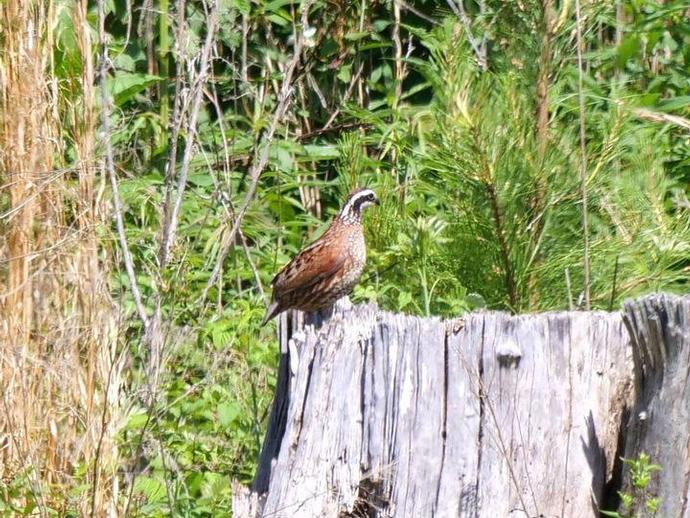 It's time for another #BenInNature update presented by our friends at Carter Bank & Trust!

I'll be the first to admit that this isn't the greatest picture, but the subject is so cool that I had to use it anyway: this is Colinus virginianus, the northern bobwhite!

Northern bobwhites used to be much more common than they are today. In fact, it's estimated that their populations declined 85 percent between 1966 and 2014, and they have all but disappeared from the northern part of their range. This decline is ongoing and there are many factors that feed into it. One of the main factors, of course, is that humans have destroyed large portions of their habitats. Bobwhites also benefit from occasional brush fires in areas where they live, which are now largely kept in check by humans. When you factor in that these are ground-nesting birds and can easily fall prey to domestic cats, it's easy to see why bobwhites are in a precarious situation.

In areas where bobwhites can be found, they can be found year-round. They tend to live in agricultural fields, open woodland areas, grasslands, and forest edges. They're more commonly heard than seen, and their call is a distinctive whistling "bob-WHITE." VMNH Associate Curator of Recent Invertebrates Dr. Kal Ivanov heard this one on a recent field trip to Axton and managed to spot it, then pointed it out to me (alas, I was shooting handheld with a telephoto lens from approximately 300 miles away, thus the quality of the photo).

While northern bobwhites are not yet considered endangered, they are considered "near-threatened." This was the first one I've seen in years. If you'd like to learn how to help out the northern bobwhite, visit the bobwhite page for the Virginia Department of Wildlife Resources located at https://dwr.virginia.gov/quail/