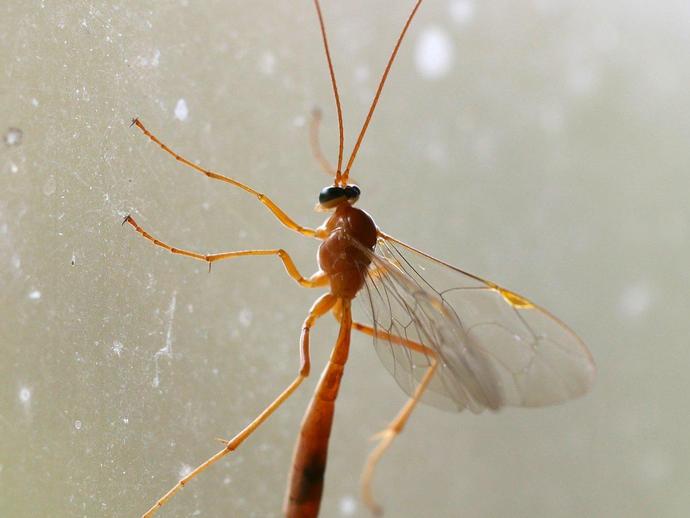 It's time for the Friday edition of #BenInNature! It's always amusing to me (in a deeply frustrating way) to see how the media often covers insects. A handful of Asian giant hornets are found in the Pacific Northwest and headlines suddenly scream that "murder hornets" are invading the U.S. A few venomous puss caterpillars are found in Virginia -- which is within their range -- and you see headlines about these horrible caterpillars "suddenly" appearing in Virginia. And when I was looking up information on this ichneumon wasp, which belongs to the genus Netelia, one of the first links I found was a news story proclaiming that "Zombie bugs invade region," which ends with a quote from a lady saying that she hopes the wasps don't lay eggs on her while she's sleeping.

This particular wasp is not a zombie, nor is it invading anything, but it is pretty cool! Ichneumons are an enormous family of wasps with more than 25,000 described species, although it's believed that is just a fraction of their true diversity. What almost all ichneumons have in common is that they're parasitoids, which means that they have a close association with a host species that generally results in the host's death. For ichneumons, the host is generally the immature stage of an insect or spider, and the nature of the association is similar to that of John Hurt and the alien that burst out of him in the movie "Alien."

While this is obviously unpleasant for the caterpillar, we humans don't have to worry about any ichneumons injecting us with eggs while we sleep, no matter what you may have read elsewhere.

Thank you to VMNH Associate Curator of Recent Invertebrates Dr. Kal Ivanov for the ID!