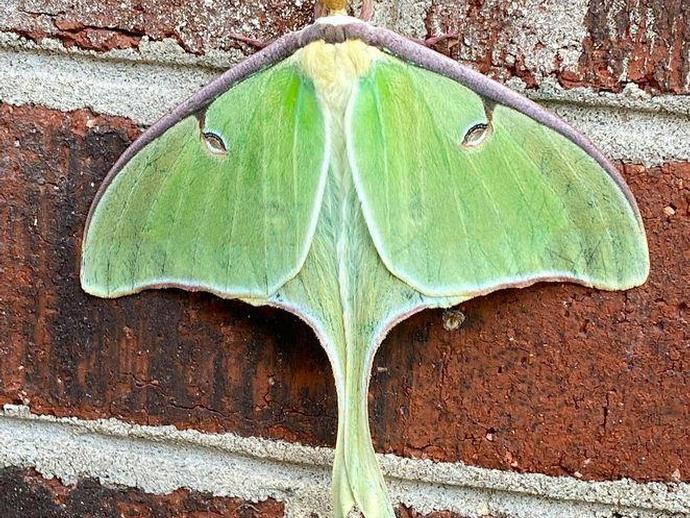 It's time for the Friday edition of #BenInNature presented by our friends at Carter Bank & Trust!

It took me a while, but I finally managed to track down everyone's favorite moth: Actias luna, the Luna moth!

While Virginia has a number of large, charismatic moths, the Luna moth seems to be the winner of most moth popularity contests. These large moths (they can have a wingspan of 4.5 to 7 inches!) are found in or near deciduous hardwood forests and are native to eastern North America. In the northern part of their range, they have one brood per year between May and July; in the more southern part of their range, they have up to three broods per year and can be found from March through September.

Luna moth caterpillars eat leaves from several different trees, including white birch, persimmon, sweet gum, hickory, walnut, and pecan. The adults don't eat at all, however, and they only live for about a week; their only goal is to mate and make sure there are more Luna moths next year!

These moths have a couple of remarkable defense mechanisms. As caterpillars, they can deter predators by rubbing their mandibles together; this causes a clicking noise that warns predators to stay away. If the predator keeps threatening them, the caterpillars will regurgitate their intestinal contents, which has been proven to deter many of their predators (it would certainly deter me).

As adults, Luna moths have a novel defense against bats. The long "tails" that trail from the Luna moth's hindwings distort a bat's echolocation and likely evolved for that very reason. Experiments have been conducted in which these tails were removed from Luna moths (removing the tails doesn't inhibit their ability to fly). In these experiments, it was found that moths with intact wings were successfully attacked by bats only 35 percent of the time, as the bats usually went straight for the tails, allowing the moth to escape largely intact. Meanwhile, moths with clipped wings were caught by bats 81 percent of the time!

Unfortunately, Luna moths are under threat, and as usual, it's mankind's doing. In the mid-1800s, gyspy moths (Lymantria dispar) were accidentally released in the U.S., and they have had a devastating effect on America's forests. In an effort to control gypsy moths, the parasitic fly Compsilura concinnata was deliberately introduced in the U.S. in the 20th century. While these flies are somewhat effective at providing a biological control on gypsy moth populations, they're also not very picky, and they will parasitize and eventually kill more than 150 species of moths and butterflies native to North America. One of those species, sadly, is the Luna moth. While Luna moths aren't in danger of going extinct anytime soon, these parasitic flies may be part of the reason that Luna moths aren't quite as abundant as they once were.