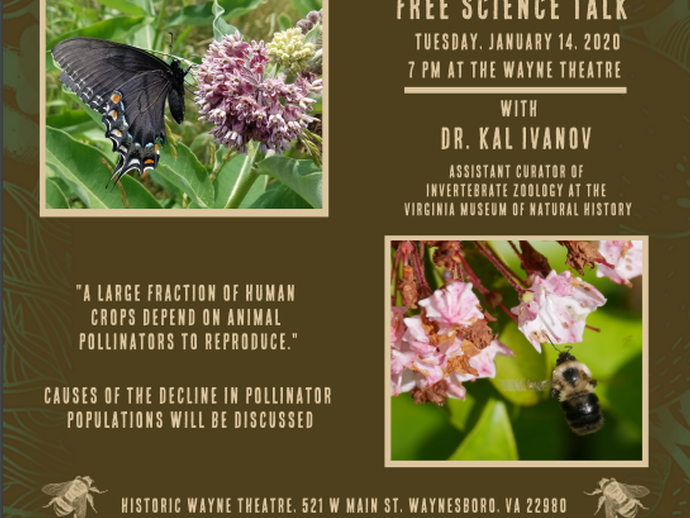 Join Dr. Kal Ivanov, VMNH associate curator of invertebrate zoology, as he presents "Helping Bees Survive: Sustainable habitat for bees and other pollinators", on Tuesday, January 14 at 7 p.m. at the historic Wayne Theatre in Waynesboro. The presentation is free to attend.

Three-fourths of the world's flowering plants depend on animal pollinators to reproduce. Pollination services play a critical role in supporting and maintaining terrestrial productivity in both natural and agricultural plant communities. A large fraction of all human crops depend on the free services of pollinators and every season pollination by honeybees, native bees, and other insects delivers billions of dollars in economic value.

However, declines have been reported for many insect pollinator groups, including honeybees, bumblebees, solitary bees, and hoverflies. Habitat loss and fragmentation, urbanization, pesticides, pathogens, climate change and their interactions are all proposed drivers of pollinator decline, which represents a significant threat to biodiversity, to global food webs, and to human health.

Establishment of preserves and protected areas, habitat restoration, and encouragement of wildlife landscaping, rather than monoculture lawns, are just but a few examples of efforts to sustain pollinator diversity in wild and human-influenced ecosystems.