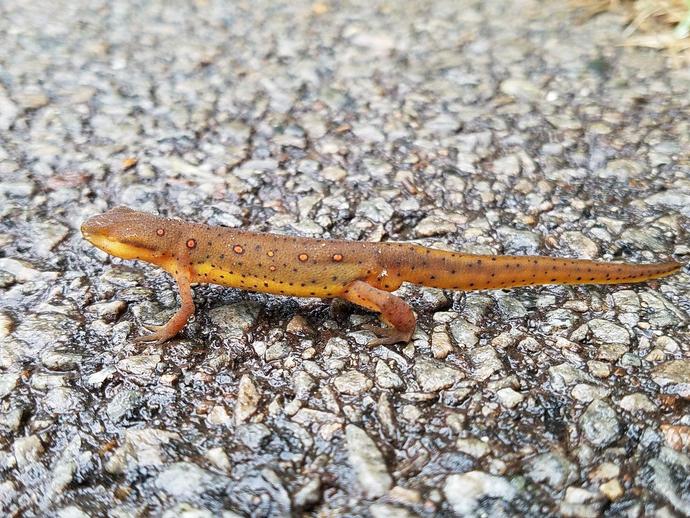 Many people are currently enjoying the mass migration of birds to the south. Another often missed migration is occurring this weekend at Anglers Park in Danville, Virginia. The Red-spotted Newt, a salamander that lives as a larva in the water, lives on land as an eft, and heads back to the water to reproduce as an adult, is undergoing a mass migration back to breeding ponds. The juvenile efts which have lived in the surrounding forests for several years are now becoming adults and they are heading to their natal ponds to breed in the fall, winter, and spring. As the newt travels during the day and night, they are not worried about being eaten by predators. They are brightly colored to warn potential predators not to eat them. Newts excrete a very powerful poison called tetrodotoxin. This poison does not allow a predator's nerves and muscle to work properly if the newt is eaten. There is something though that is causing mass mortality of these animals... motor vehicles. Roads that are constructed near breeding habitats can kill many hundreds of these animals as they are traveling to their ponds. If you happen to find one on the road, do not worry about helping it across, you can pick them up and put them in the direction they are heading...just don't lick your fingers after handling them.

This update provided by VMNH Research Associate Jason Gibson, who is also a member of the Virginia Herpetological Society.