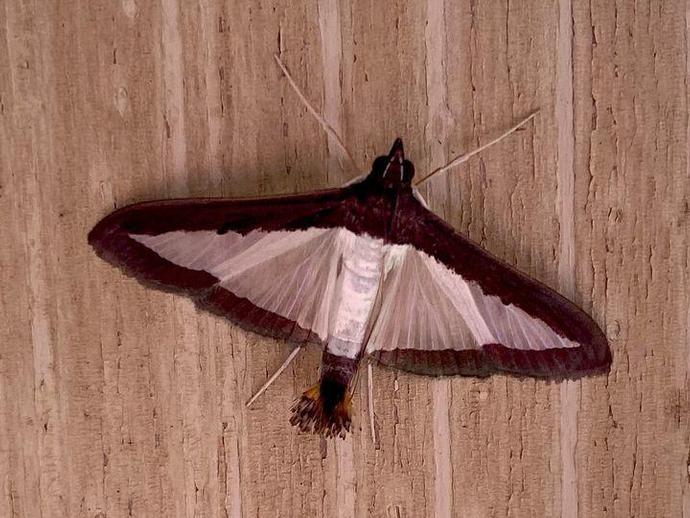 Merry Christmas! We're reaching into the archives for today's #BenInNature update presented by our friends at Carter Bank & Trust! The following post was originally published on October 12, 2020.

The melonworm moth (Diaphania hyalinata) can be found throughout much of eastern North America, and its caterpillars can be a real pest if you have a garden. Melonworm caterpillars will eat the leaves of cucumbers, squash, pumpkins, and -- of course -- melons. However, the caterpillars aren't as big of an issue in the northern parts of the moth's range. In Virginia, you'll likely only see these moths in October and November. However, in the warmer Gulf states, melonworm moths produce multiple generations per year and can be found all year long!

Of course, one of the first things you might have noticed about this striking little moth is its unusual rear end. Those bristly structures at the tip of its abdomen are no fashion statement; they're actually something called "hair-pencils." Hair-pencils can be found on male butterflies and moths, and they release pheromones that act as aphrodisiacs to females of the species while repelling other males. When a male gets close to a female of the same species, he will extend his hair-pencils and fan his pheromones toward her. If she likes what she smells, she'll rapidly flick her antennae and then extend her abdomen to signal her interest. Bugguide.net didn't mention anything about flowers or mixtapes, but I like to think there's an element of romance there.