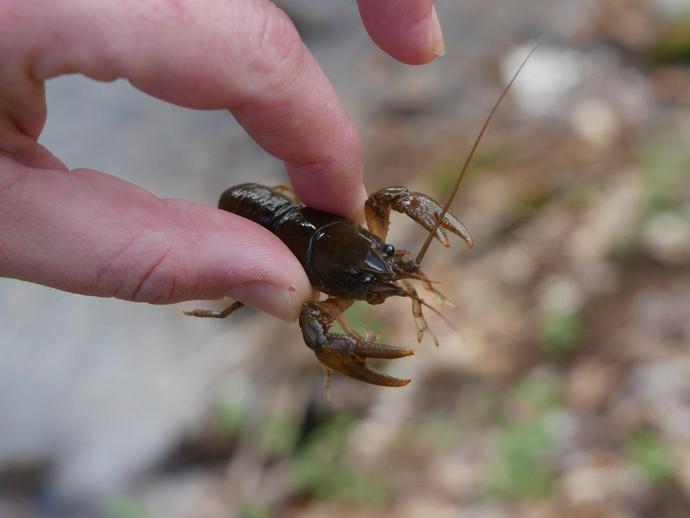 These little guys go by many names: crayfish, crawfish, crawdads, and mud bugs, just to name a few. There are three different families of crayfish, but the southeastern United States boasts more crayfish diversity than anywhere else in the world, all belonging to the family Cambaridae, which contains more than 330 species spread across nine genera. I had initially hoped to identify the pictured crayfish down to genus, but as it turns out, poking around the internet looking at taxonomic keys for a couple of hours is no replacement for a Ph.D. in biology. Who could have guessed?

Crayfish are pretty interesting animals. The vast majority of crayfish live in freshwater, although a few species live in brackish or even saltwater. They eat pretty much anything they can get their claws around, including small fish, worms, insects, tadpoles, snails, and plants. They also eat decomposing plant and animal matter (and they seem to show a special affinity for expired cheese found in the back of the refrigerator, probably because it's hard for crayfish to get access to cheese in the wild). Like all crustaceans, crayfish regularly get too big for their tough exoskeletons, so they have to shed their old exoskeleton in a process known as "molting." While their new exoskeleton hardens, they have to take extra care to hide from predators. You might notice that the tiny crayfish in the second picture doesn't have any claws; this is probably because it had a bad molt and its claws remained stuck in its old exoskeleton. Fortunately, crayfish can regrow missing limbs!

In the more southerly states, such as Louisiana, crayfish regularly build "chimneys" made of mud that rise up several inches from the ground. In these states, crayfish are actually considered a lawn pest. They dig down below the water table and live under the soil at the base of the chimney. While no one is completely certain why they construct these tall chimneys, one theory is that it helps maintain airflow which oxygenates the water at the bottom of the chimney. You aren't likely to see a crayfish chimney in southwest Virginia, but if you live near a creek, keep your eyes peeled on a rainy night. When it's wet enough, crayfish actually crawl out of the water and go foraging on land! #BenInNature