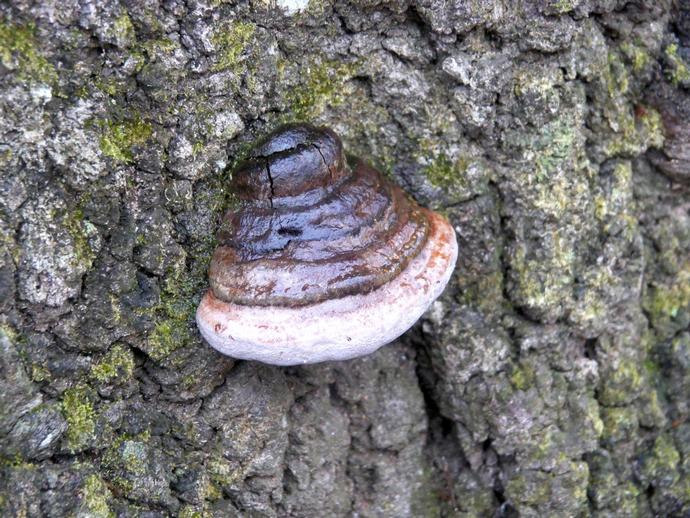 Shelf fungi, also known as polypores, are not your ordinary mushroom. They fulfill the same basic job as a mushroom -- they produce and disperse spores to continue the species -- but unlike your typical mushroom, they frequently have a woody or leathery texture and some species can live for years!

The name "polypore" stems from the fact that these mushrooms don't have gills underneath the cap, they have tiny pores. If the shelf fungus is the woody variety and resembles a horse's hoof (like this one does), the structure is commonly called a "conk."

Shelf fungi add a new layer of spore tissue each growing season, sort of resembling the growth rings in a tree. Sometimes there can be two growing seasons in a year, however, so the layers do not always correlate to years. This particular shelf fungus appears to have eight layers, meaning it's anywhere from four to eight years old!

This group of fungi help speed the rotting of wood, which is a good thing for forests but a bad thing if you're in the lumber industry. Once a tree has developed shelf fungi, there's no way to eradicate them.

The two most famous shelf mushrooms are probably "turkey tails" (Trametes versicolor), which is known for its beautiful patterns and use in traditional medicine, and "chicken of the woods" (Laetiporus sulphureus), which is supposed to be delicious and can be prepared in most of the same ways as actual chicken! However, it can also cause nausea, vomiting, and dizziness in some rare cases, so as with all things related to eating mushrooms found in the woods, it's best to exercise caution. #BenInNature

This post brought to you by VMNH Corporate Supporter King's Grant Retirement Community.