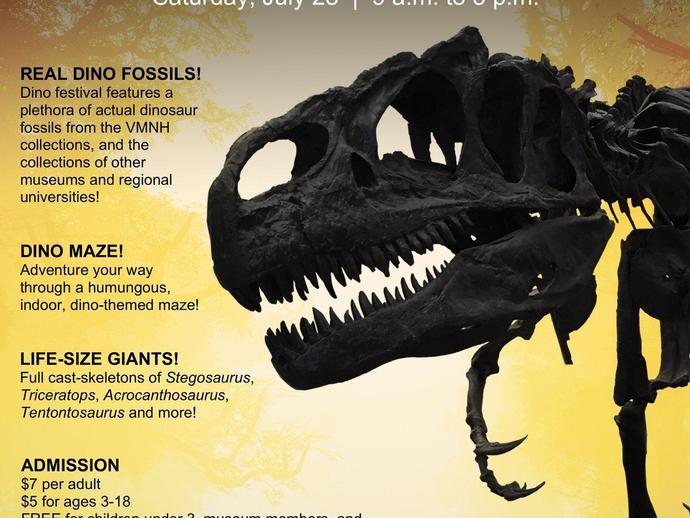 The annual dinosaur takeover of the Virginia Museum of Natural History will take place July 27-28 in Martinsville! The event features a huge variety of life-size dinosaur cast skeletons and skulls, a plethora of actual dinosaur fossils that visitors can view and touch, costumed dinosaurs, prehistoric virtual reality, games, crafts and activities!

LIFE-SIZE CAST SKELETONS AND SKULLS!
Marvel over some of the most well-known dinosaurs to ever roam the earth, including Triceratops, Stegosaurus, Acrocanthosaurus, Tentontosaurus, Allosaurus, Tyrannosaurus rex, Appalachiosaurus, Diplodocus and other prehistoric favorites!

DINO MAZE!
Find your way through a massive dino-themed maze, where prehistoric creatures await you at every right - and wrong - turn!

A DINO FOSSIL SMORGASBORD!
A plethora of dinosaur fossils will open the window to the past, including the only known fossil evidence that T. rex and Triceratops engaged in battle!

GAMES AND CRAFTS ALL FESTIVAL-LONG!
Want to look the part? Get your face painted...dino-style! Want to travel back in time? Explore a prehistoric world in virtual reality! Want to satisfy your creative urges? Participate in a dino-themed craft! Want to satisfy your creative urges, but have no artistic skills? Have a professional balloon artist create a dinosaur balloon animal for you!

EXPERT PALEONTOLOGISTS
Real scientists from a variety of museums and universities - and who devote their professional lives to studying paleontology and dinosaurs - will be on hand throughout the event to interact with visitors! Find out what it takes to become a paleontologist! Learn about the museum's most recent dinosaur fossil dig in Wyoming from the scientists who were there! Yes, they will be showing-off some of the fossils they uncovered!

ADMISSION
$7 per adult
$5 for ages 3-18 and seniors ages 60+
FREE for museum members and members of ASTC participating museums. Admission is valid for both days of the festival.
Groupons ARE accepted!