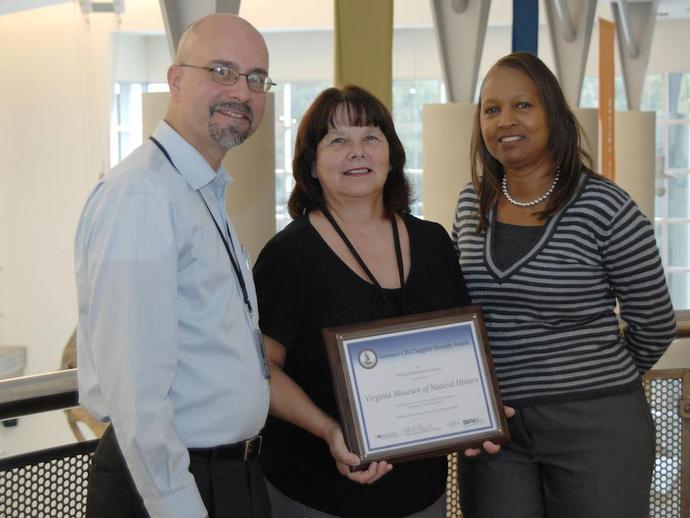 The Virginia Museum of Natural History has received the 2012 SWaM Achievement Award for its outstanding efforts in supporting minority-owned businesses throughout the Commonwealth. The award, part of the Governor's 2012 Supplier Diversity Awards, recognizes state entities that have improved SWaM performance or have the highest percentage of SWaM expenditures over the most recently completed fiscal year based on agency size and total discretionary expenditures.

The Small, Women-owned, and Minority-owned Business (SWaM) certification program is a state program of the Commonwealth of Virginia designed to enhance procurement opportunities for SWaM businesses participating in state-funded projects.

Raymond Everett of Re Replacement Parts, a minority-owned small business in Petersburg, said that the opportunity the SWaM program provides his business and others has been a significant benefit.

"The museum is proud to be an avid proponent of the SWaM initiative," said Dr. Joe B. Keiper, executive director of the museum. "We serve a diverse community that we work hard to engage and celebrate. These efforts increase our positive economic impact locally."

Gloria Niblett, director of administration and services at the museum, puts special emphasis on the role that Glynda Cassady, the museum's procurement manager, plays in leading the efforts for the museum.

"I am very proud of Glynda for her outstanding efforts in support of the SWaM program," Niblett said. "Receiving the Governor's 2012 Supplier Diversity Award is a great accomplishment for Glynda as our agency procurement manager and the agency as a whole."

(Pictured from left to right are: Dr. Joe B. Keiper, executive director of VMNH, Glynda Cassady, procurement manager at VMNH, Gloria Niblett, director of administration and services at VMNH)