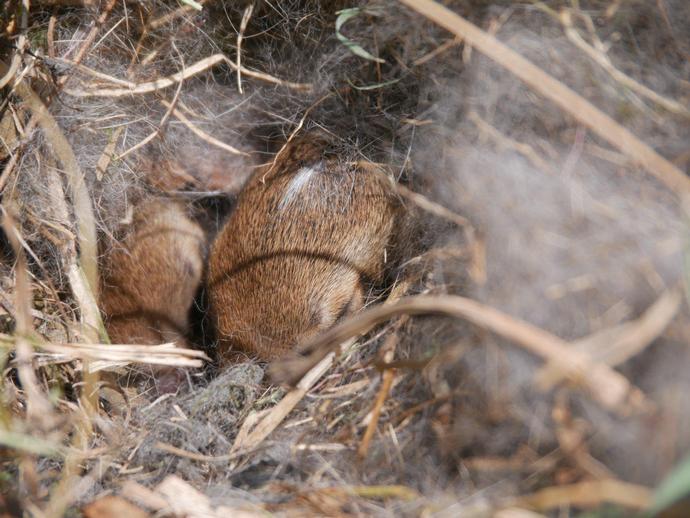 I have a nice neighbor who comes and cuts and bales the hay on my old family property. He started cutting the hay a couple days ago, and as I was walking through a newly-cut field taking nature photos, I nearly tripped over a rabbit nest!

These baby rabbits are almost certainly eastern cottontails (Sylvilagus floridanus). When rabbits are ready to give birth, they dig a slanted hole in some soft soil and line the hole with plant material and fur. The mother will come by the nest to nurse about twice per day. The babies begin to open their eyes around four to seven days, which leads me to believe that the babies in this litter were less than a week old! Baby eastern cottontails begin leaving the nest for brief trips after about two weeks. After four to five weeks, they're weaned and much more independent, and by seven weeks, they disperse from the nest!

If you find a rabbit nest, it's best not to disturb it. I had already disturbed this one by nearly tripping over it, but fortunately, the babies were unharmed. If you do disturb a rabbit nest, just do your best to repair it. Mother rabbits return to their nests as long as they're safe and there are no predators around.

Of course, after finding the nest, it occurred to me that while my neighbor had cut the hay, he hadn't baled it yet. Although the babies somehow survived the cutting of the hay, I wasn't as confident they would survive the baling process.

So I put up the sign in the third picture.

This post brought to you by VMNH Supporters Janet and Richard Ashby.