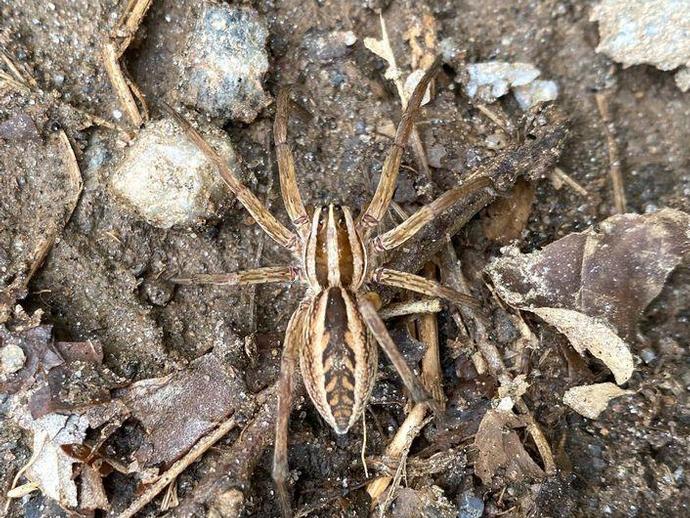 We're reaching into the archives for today's #BenInNature update presented by our friends at Carter Bank & Trust! The following post was originally published on October 27, 2020.

Halloween is my favorite holiday and it's almost upon us! What better way to celebrate than with SPOOKY SCARY SPIDERS?!? My apologies to the arachnophobes out there, but for the rest of this week, we'll be looking at some cool spiders you can find in southwest Virginia!

First up is Rabidosa rabida, the rabid wolf spider. Despite the name, these spiders don't carry rabies; the name likely comes from their aggressive behavior toward insects and other spiders. The "wolf" portion of the name comes from the way that wolf spiders hunt; like wolves, they stalk their prey from a distance, remaining concealed until the moment comes to strike.

Rabid wolf spiders are very common, and the distinctive pattern on their abdomens makes them one of the easiest wolf spiders to identify. They live in small holes and burrows during the day and go hunting at night, either ambushing their prey or even chasing it down!

These spiders have some fairly interesting courtship rituals. The female spiders leave a silken dragline while they're making their nightly rounds. When a male spider stumbles across the dragline, he follows it to the female like a trail of breadcrumbs. Once he's found her, the courtship dance begins, with each spider making a series of turns based on the turns its potential mate just made. If the male successfully manages to woo the female (and she doesn't just straight-up eat him), mating will take place.

The female rabid wolf spider will carry her egg sac around on her abdomen until the eggs hatch, at which point dozens of tiny spiderlings will crawl onto her back and ride around until they're big enough to scatter and make their own way in the world. Even as someone who likes spiders, the sight of a large wolf spider covered in baby spiders is fairly horrifying, but at least it's good parenting!

While rabid wolf spiders can bite, they only bite humans if provoked. As long as you don't try to squish one, you'll be fine. Their bite has been compared to a wasp sting, but unless you're allergic, it isn't anything to worry about.