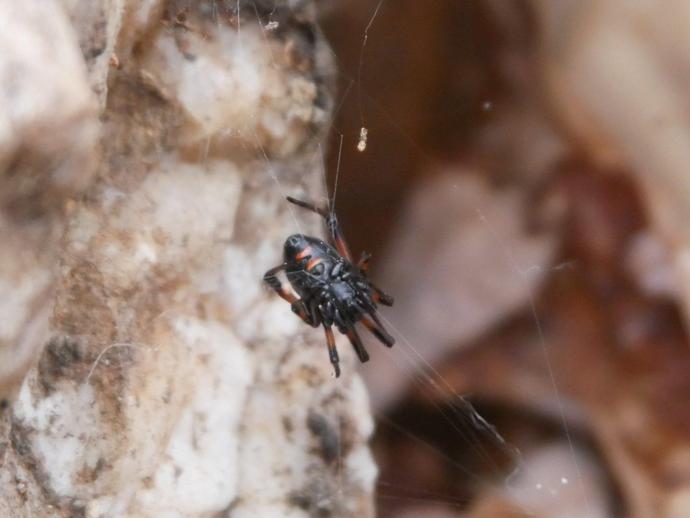 We're reaching into the archives for today's #BenInNature update! The following post was originally published on April 14, 2020.

This is Latrodectus mactans, better known as southern black widow. According to VMNH Associate Curator of Entomology Dr. Kal Ivanov, the red bands on the legs suggest this one is an immature female; when she reaches maturity, the legs will be solid black.

When most people hear the name "black widow spider," it conjures up an image of a massive spider with inch-long fangs dripping with deadly venom, positioned directly beneath a handlebar mustache and top hat (which are obviously the universally-recognized indicators of evil). While getting bitten by a southern black widow isn't a pleasant experience by any stretch of the imagination, it also isn't a death sentence. According to a scientific article from the "Annals of Pharmacotherapy," between 2000 and 2008, there were 23,409 documented Latrodectus bites in the U.S. (this also included Latrodectus variolus, the northern black widow, and Latrodectus hesperus, the western black widow). Of those 23,409 bites, the total number of deaths was ... zero.

Of course, back before we developed antivenom for black widow spider bites, the outlook wasn't quite as rosy. Back in the 1920s before the first antivenoms were produced, it is believed that as many as 50 out of every 1000 people bitten by the western black widow succumbed to the bite. Isn't modern medicine great?

So what happens when someone is bitten by a black widow? No matter which member of the genus bites a person, the results are very similar. First off, black widows may give a "dry bite" and not inject any venom at all. If they do inject venom (which only mature females are capable of doing), in most cases, it will only result in a bit of localized pain. However, if the spider delivers a big enough dose of venom, it will cause the person to experience "latrodectism." This will begin with intense pain at the site of the bite, followed by sweating and goosebumps. The pain slowly travels through the body and additional symptoms will appear, including headache, nausea, and general feelings of weakness. The symptoms will usually subside after one to four days, though they can sometimes last a bit longer.

The important thing to remember, however, is that black widows don't want to bite you. They just want to hang out underneath a rock or a log in the woods and eat bugs, just like the one I photographed here. They generally flee when they feel threatened, and the vast majority of bites are caused by someone accidentally crushing a black widow. All of this is to say that black widows should be observed from a respectful distance when encountered in the wild, but they aren't the terrifying monsters that people make them out to be.