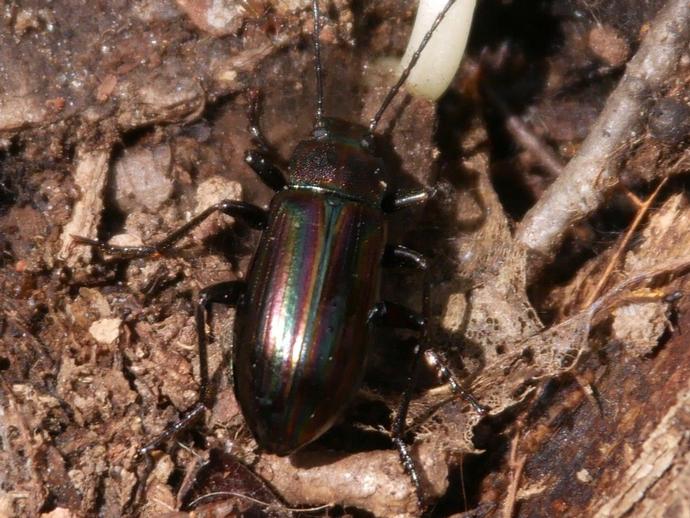 We're reaching into the archives for today's #BenInNature update! The following post was originally published on April 13, 2020.

This colorful little guy is Tarpela micans, a darkling beetle belonging to the family Tenebrionidae. According to VMNH Research Associate and Professional Beetle Enthusiast Curt Harden (who also identified this fellow for me), Tarpela micans feeds on lichen.

The first thing that strikes you about this beetle, of course, is its metallic-looking rainbow-colored elytra (that's the hard shell that covers a beetle's flight wings). As is the case with many insects, these colors aren't solely created by pigments, but rather by complex, tiny structures on the beetle's exoskeleton that reflect light in unusual ways. After doing a little reading on this topic, it quickly became clear that I would need to take a Ph.D.-level course in theoretical optics to even begin to understand how it works. At the most basic level, the outermost layer of a beetle's shell is made of plate-like layers that are tilted in different directions, and these layers bend and reflect light. A layer of pigment underneath these tiny plates enhances the effect.

So why are certain beetles iridescent? Some scientists believe it has something to do with helping attract mates, although most beetles use pheromones to find mates (that's also how the Japanese beetle trap in your garden attracts those beetles). Another theory is that iridescence may help provide camouflage -- for example, iridescent green leaf beetles may resemble a drop of dew on a leaf when viewed by some predators. Other scientists suggest that having a shiny shell that reflects light allows iridescent beetles to better regulate their body temperature. There is still a lot of debate and many questions that remain unanswered, but isn't that what makes science fun?