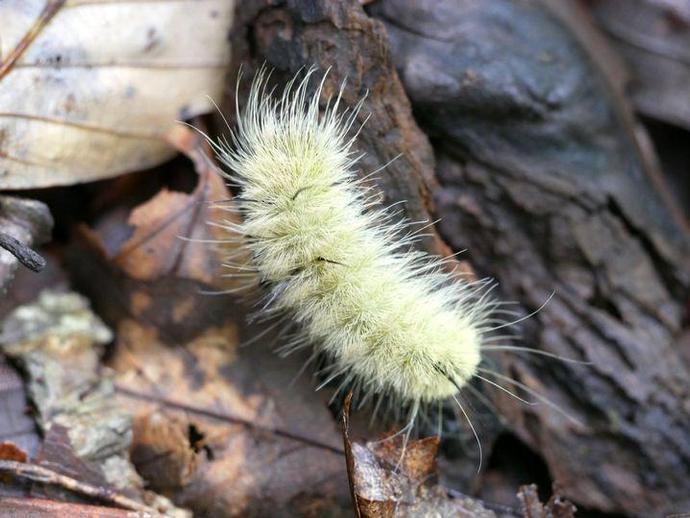 We're reaching into the archives for today's #BenInNature update presented by our friends at Carter Bank & Trust! The following post was originally published on October 8, 2020.

The American dagger moth caterpillar (Acronicta americana) definitely looks like the kind of caterpillar that would ruin your day if you were to touch it. However, while you shouldn't touch unfamiliar caterpillars since many have venomous spines, this little fellow does not (although there are reports that its hairs can cause skin irritation, so you should still be careful if you have sensitive skin).

American dagger moth caterpillars can be found from July through October, while the adult moths can be spotted from April through September. These moths are fairly widespread east of the Rocky Mountains. The caterpillars are pale yellow to white in color and grow about two inches long, while the adults are a fairly drab gray. However, they can have a wingspan of about 2 1/2 inches, so they're fairly large moths.

While we're talking about moths and caterpillars, it's worth pointing out that there's a viral news story making the rounds about the puss caterpillar, which is the larval form of the flannel moth. The puss caterpillar looks a bit like an ambulatory toupee and it has venomous spines that cause an extraordinarily painful sting. The news story reports that these caterpillars have been found in eastern Virginia, though it doesn't specify where, and it's pretty light on details and big on fearmongering. The fact is, there are 11 different species of flannel moths in the U.S. and their caterpillars are nothing new. As long as you don't go out in the woods and grab random caterpillars, you'll be fine. You can safely file this one with the so-called "murder hornets" -- an attention-grabbing headline for a slow news day.