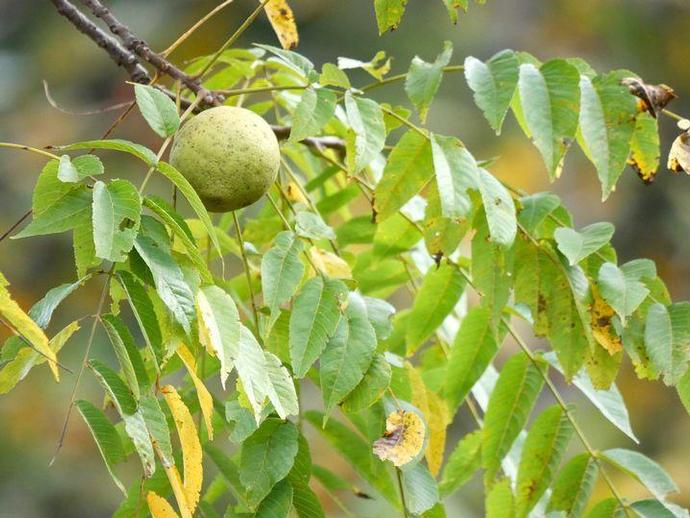 We're reaching into the archives for today's #BenInNature update presented by our friends at Carter Bank & Trust! The following post was originally published on October 16, 2020.

The eastern black walnut (Juglans nigra) is fairly widespread in eastern North America, and I have a number of them on my property. The pictured black walnut tree is growing right next to a building with a tin roof, which is unfortunate, because every time the wind blows and a walnut hits the roof I think that I'm under attack.

Even though its wood is highly desirable, black walnut is only increasing in numbers in recent years. This is due to a combination of factors. For one, various epidemics have devastated the numbers of a lot of other native trees; Dutch elm disease has hurt elm trees, emerald ash borer beetles have killed ash trees, and Gypsy moths have devastated oak trees. Black walnut tends to fill in the gaps left by those trees because it grows quickly and squirrels and other rodents are great at dispersing its seeds. Black walnut also has an advantage because it's allelopathic, which means that its roots produce chemicals that inhibit the growth of any plants near it! In fact, walnut trees are so famous for being allelopathic that way back in the first century, Pliny the Elder wrote that "The shadow of walnut trees is poison to all plants within its compass."

If you have a black walnut on your property, you may notice that it takes a long time for it to produce walnuts and that it produces more some years than others. When it comes to fruiting, black walnut is fairly irregular. It has a roughly 130 year lifespan and it takes a solid 20 years to begin producing big crops of walnuts. It's also an example of a tree that undergoes "mast seeding," which is when trees in a region synchronize and produce a huge number of seeds every two or more years.

If you've ever processed walnuts by hand, you've definitely noticed that the outer skin of the walnut will stain your hands black. Believe it or not, early American settlers used to use black walnut pigment to dye their hair! The compounds in walnuts are still used as a natural dye today, although since the invention of Just for Men, the dyes are mainly used in crafts.

Even though black walnut is native to the eastern U.S., if you'd like to see the largest known living black walnut tree, you'll have to travel all the way to Sauvie Island, Oregon. Measuring 112 feet tall and 8'7" in diameter, this monster holds the world record. Just be sure not to park your car underneath it when the walnuts are dropping or you might end up with a new sunroof.