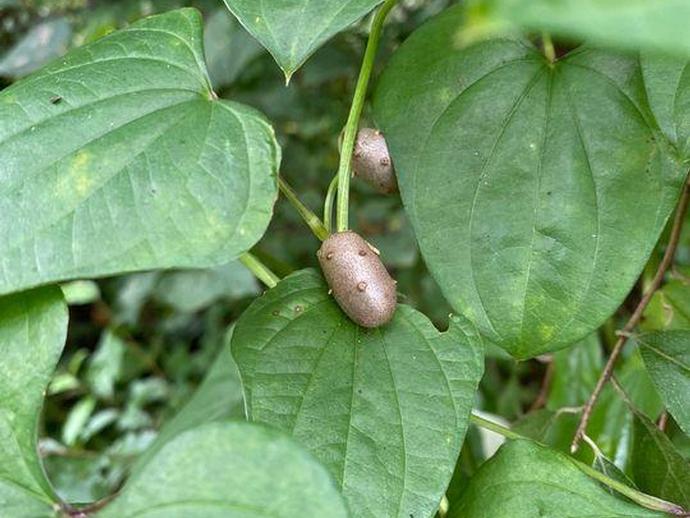 We're reaching into the archives for today's #BenInNature update presented by our friends at Carter Bank & Trust! The following post was originally published on September 18, 2020.

The other day I spotted this unusual vine on my property, covered in what looked like tiny potatoes. As it turns out, that isn't too far from the truth. This is Dioscorea polystachya, commonly referred to as Chinese yam!

As the name suggests, this plant is not native to the U.S. and is considered an invasive species. It originated in China but can now be found throughout East Asia. It was introduced to the U.S. in the 1800s or early 1900s, and interestingly enough, it was introduced in Europe in the 1840s to help combat the northern European potato famine.

The vines of Chinese yams can grow up to 16 feet long, and they produce flowers that smell like cinnamon, giving the plant its second common name: Cinnamon vine. The plant also produces small "bulbils" (small plants that grow directly from a plant's stem), which are the tiny potato-looking things you can see in the photo. These little guys are edible, apparently tasting a bit like new potatoes, but the real prize is the tuber (thickened part of a plant's stem that grows underground, like a potato).

The tubers are utilized in traditional and alternative medicine in a variety of ways, but they can also be used for food. In Asia, these "yams" are commonly prepared and eaten raw, steamed, or deep-fried, and are also used as an ingredient in a variety of different meals.

Unfortunately, like so many invasive species, these plants have the tendency to crowd out our native species here in the U.S. They grow in moist habitats (I found this one growing right next to a creek) and are a particular problem in Great Smoky Mountains National Park, where they are spreading rapidly.