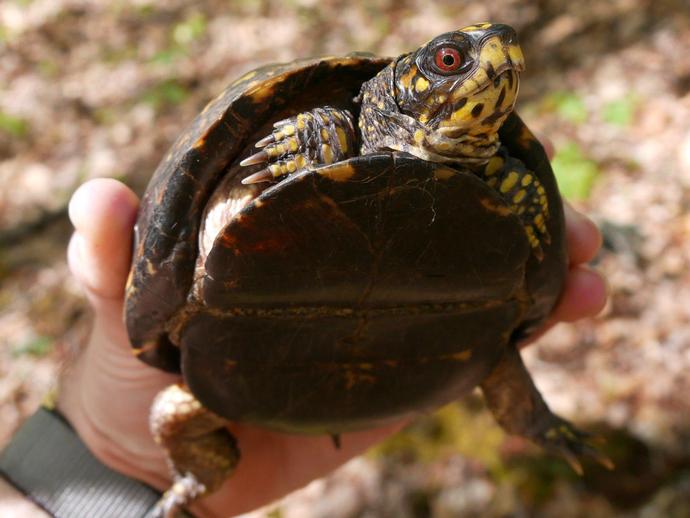 We're reaching into the archives for today's #BenInNature update presented by our friends at Carter Bank & Trust! The following post was originally published on June 10, 2020.

This is a woodland box turtle (Terrapene carolina carolina), and it's one of the most commonly spotted turtles in southwest Virginia. This particular box turtle is almost certainly a male. There are a few different indicators; the easiest to spot is that generally, male box turtles have red eyes while female box turtles have brown or yellowish eyes. Male box turtles also generally have more brightly colored heads than females; the rear edge of the shell tends to flare outward; and males also have a concave spot on their plastron (the underside of the shell) that aids in mating. While some of those features aren't too easy to spot in this particular photo, the evidence points toward a male.

The woodland box turtle is one of six different subspecies of box turtle, and there's a substantial amount of variation between the different subspecies. The next time you're up in Floyd County, keep an eye peeled for box turtles; according to our friends at the Virginia Herpetological Society, the largest box turtles in Virginia can be found in the southern Blue Ridge Mountains in Floyd.

By the way, if you believe it's important to respect your elders, you should definitely show some respect to woodland box turtles. According to the VHS website, an adult male box turtle with the date "1874" carved into its shell was found in Rockingham County in August 1985. If the carving was authentic, that would mean the turtle in question was more than 111 years old!

Friday and Saturday: 10am - 4pm
Closed all other days