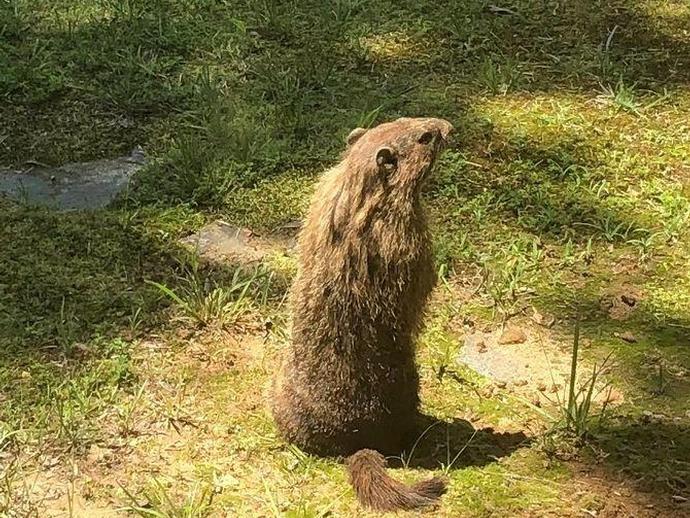 We're reaching into the archives for today's #BenInNature update presented by our friends at Carter Bank & Trust! The following post was originally published on July 13, 2020.

This critter is Marmota monax, but it goes by many common names, including groundhog, woodchuck, and whistlepig. My grandpa was always partial to that last one; as he explained it, when you see a groundhog and whistle at it, it will sit up on its hind legs ("And that's when you shoot it," he would add; he wasn't a big fan of groundhogs). There is some truth to that; if a groundhog is startled, it will rear back on its hindlegs, stand motionless for a moment, and then whistle to alert other groundhogs of potential danger!

Groundhogs can be found throughout much of the eastern U.S., and their range extends into the midwest and up through most of Canada. They like to live in pastures and at the edge of woodlands, which unfortunately puts them near roads fairly often. Groundhogs live in burrows that usually have two to five different openings so they can easily escape from predators. The burrows serve a variety of purposes: they're a place to escape from danger, they provide shelter in bad weather, and they offer a place to hibernate. They also include a nursery chamber for baby groundhogs (and they're also a good place to, you know, make baby groundhogs), and they even have a dedicated bathroom chamber!

A lot of people consider groundhogs to be pests, but human activity is exactly what has allowed groundhogs to thrive. They do well in second-growth forests, they love open land, they don't like predators, and they eat grasses and agricultural crops. As a result, if you're living in a suburb with a formerly logged forest and you have a garden, you're pretty much living in the groundhog equivalent of a Hilton.

You might be wondering why groundhogs are called "woodchucks," given that you've probably never seen one chucking wood. As it turns out, the name has nothing to do with wood or the chucking thereof; it comes from the old Algonquian name for the animal, "wuchak."

On a final note, everyone is familiar with Groundhog Day on Feb. 2, and weather-predicting groundhog Punxsutawny Phil is a household name following his breakout performance in the 1993 Bill Murray classic "Groundhog Day." But did you know that Punxsutawny Phil isn't the only groundhog meteorologist? Sun Prairie, Wisconsin has Jimmy the Groundhog; Dunkirk, New York has Dunkirk Dave; Staten Island has Staten Island Chuck; Wiarton, Ontario has Wiarton Willie; and Atlanta, Georgia has General Beauregard Lee, who I assume has a spacious veranda outside his burrow where he relaxes in the afternoons with a mint julep. As for whether or not groundhogs can predict the length of the winter, the track record isn't great; Punxsutawny Phil is apparently accurate only 39 percent of the time, making him a bit less accurate than a coin flip. He's a great showman, though.