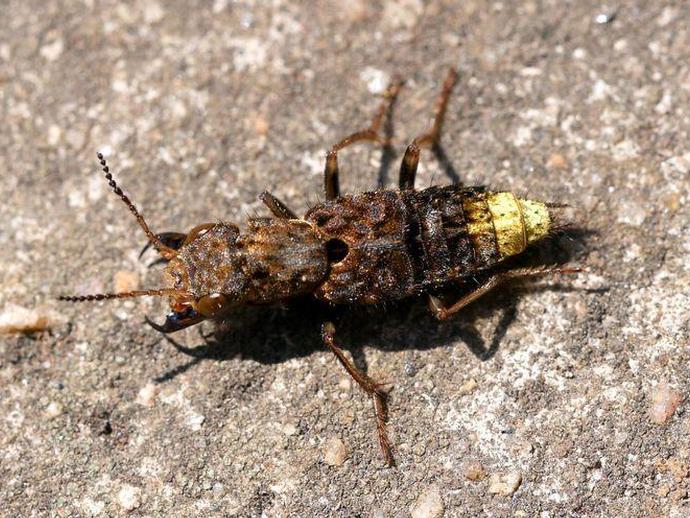 We're reaching into the archives for today's #BenInNature update presented by our friends at Carter Bank & Trust! The following post was originally published on July 17, 2020.

Now here's something you don't see every day -- and in fact, I don't recall ever seeing one before I found this one. This is Ontholestes cingulatus, the gold and brown rove beetle!
Rove beetles belong to the family Staphylinidae, which contains about 63,000 species across thousands of genera! It's an ancient family of beetles and may well be the single largest family of organisms still in existence!

The easiest way to spot a rove beetle is by its elytra, which are the hard shells that cover a beetle's flight wings. The elytra on rove beetles are very short, usually covering less than half of the beetle's abdomen.

This particular rove beetle belongs to the genus Ontholestes, which has about 30 described species. Only two of those species are found in North America, and this beetle is the only one that's native! These beetles are associated with fungi, dung, and decaying organic material (which really makes me wonder why it was hanging out on my back porch). It's also considered an indicator of undisturbed forests.

What makes this beetle really unique is the bright yellow on the tip of its abdomen. While it's difficult to tell from a photo, the yellow coloration is highly reflective, so much so that when it's viewed from the right angle, it almost appears to flash like a lightning bug! The reflective abdomen likely serves as a warning to potential predators; when threatened, this beetle will lift the tip of its abdomen in warning like a scorpion!