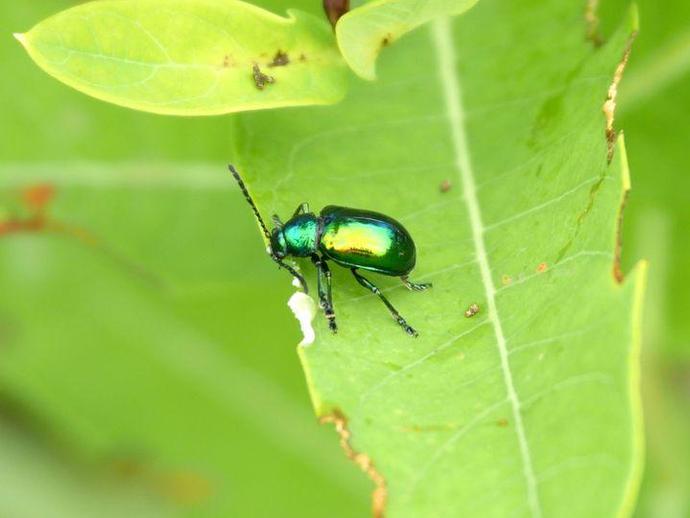 We're reaching into the archives for today's #BenInNature update presented by our friends at Carter Bank & Trust! The following post was originally published on August 4, 2020.

Here we see the brilliant dogbane beetle (Chrysochus auratus) enjoying lunch. These beetles generally feed on plants in the dogbane genus (Apocynum), which are commonly found at roadsides. However, they will also eat milkweed, which is what this particular beetle is enjoying.

The specific name of this beetle, "auratus," comes from the Latin root "aurat," meaning "gold" or "golden." The iridescent shells of these beetles sometimes appear almost golden, and can also appear to have red, green, and blue coloration. The effect is almost like a holographic image and can shift depending on how the light is hitting the beetle!
You might think that a beetle so striking would be easy prey for birds and other insects. However, the bold colors of the beetle may be aposematic in nature, meaning they serve as a warning to predators. Dogbane and milkweed both contain toxic glycosides, and like several other critters we've looked at recently that enjoy eating milkweed, the dogbane beetle is able to build up these toxic compounds within its body, making it unpalatable to predators.

You might notice that the dogbane beetle in this photo only seems to be eating the edge of the leaf and then moving on. There's a good reason for this; milkweed plants get their name from the white, sticky sap they contain, which is known as latex. This substance can gum up the beetle's mouthparts, so they tend to move on to a new spot before too much latex flows out and throws a wrench in the works. Apparently they can also be observed walking backwards across leaves, wiping off the latex from their mouths on the leaf's surface. Apparently some beetles are better at using napkins than some people are...