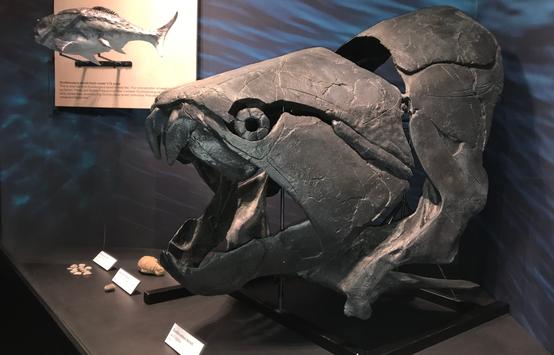 The museum's Fossil Overlook exhibit, sponsored by the Hermes Family Foundation, highlights fossils unearthed by museum scientists and other researchers, as well as accurate re-creations of ancient life that bring to life the museum's extensive scientific collections. With 99 percent of all life that has ever existed on Earth already extinct, fossils and the fossil record provide a look at life that once was and the evolution of life over time. Below is a list of some of the highlights of the exhibit, but be sure to visit in person and witness everything the exhibit offers!

Dunkleosteus Terrelli
The largest placoderm fish and one of the most formidable predators of the Devonian (aka "The Age of Fishes), Dunkleosteus terrelli grew to lengths in excess of 20 feet. The only known fossils include the bony skull and neck armor - which comprised only 35 to 40 percent of the entire body. The rest of the skeleton was probably cartilage, like sharks, because vertebrate and ribs have never been found. This exhibit features a cast display, as well as a scaled flesh model of Dunkleosteus terrelli.

Green River Fossil
The Green River Formation is an important fossil site spanning 25,000 square miles of southwest Wyoming, western Colorado, and eastern Utah.  It is known for the remarkable quality and quantity of fossils, both in number and diversity from the Eosene Epoch (53.5 - 48.5 million years ago). The locality was home to nearly 60 vertebrate animals, including fish, reptiles, birds and mammals, as well as insects and other invertebrates, and plants. On exhibit is a slab of lime-rich mudstone from the formation that represents 5 species of fossil fish.

Tylosaurus
Tylosaurus was the largest mosasaur that lived in the Western Interior Seaway during the Cretaceous period.  Tylosaurus reached up to 42 feet in length and was a top predator. This exhibit features a life-size cast skull of this remarkable lizard.

The Mosasaur and Dunkleosteus displays located within this exhibit are sponsored by the Hermes Family Foundation.