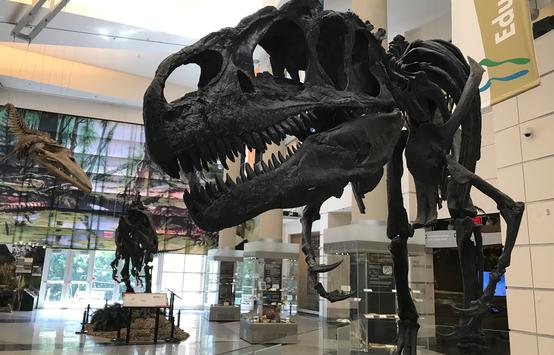 Welcome to the museum! The Harvest Foundation Hall of Ancient Life greets visitors as the first exhibit gallery with a vast assortment of fascinating displays of ancient creatures and modern science. View the flying reptile, Pteranadon, and its impressive 20-foot-wing-span soaring 40 feet above the hall. Marvel over the cast skeleton of the theropod dinosaur, Allosaurus, a 140 million year old dinosaur discovered in north central Wyoming where museum scientists conduct annual excavations. Witness Eobalaenoptera, a 14-million year old baleen whale specimen collected by museum scientists north of Richmond and in an area once deep under water. Explore the work museum scientists conduct every day inside their labs as they conduct ground-breaking research. This and much more await you inside the museum's Harvest Foundation Hall of Ancient Life!

Allosaurus
The theropod dinosaur, Allosaurus, is about 140 million years old. This specimen is from north central Wyoming where Museum scientists have been conducting annual excavations on federal lands since 1998. The Allosaurus cast skeleton is sponsored by the estate of William F. Carter & Ella Cousins Carter.

Pteranodon
A skeleton of a Pteranodon suspended from the towering 40-foot ceiling of the museum’s Harvest Foundation Hall of Ancient Life greets visitors to the Museum. The specimen has a 20-foot wing-span, and is angled to appear as though it is diving toward visitors standing on the bridge overlooking both the museum's lobby and The Hall of Ancient Life. The Pteranodon lived around 89 to 70 million years ago, during the Late Cretaceous period, and was one of the largest types of pterosaur – flying reptiles – with a wingspan of up to 30 feet. Pteranodon had toothless beaks, similar to those of modern birds. The creatures were reptiles, but not dinosaurs. However, dinosaurs and pterosaurs may have been closely related, and most paleontologists place them together in the group Ornithodira, or "bird necks".

Eobalaenoptera
This 14 million year old baleen whale specimen is suspended from the ceiling of The Hall of Ancient Life and was collected by museum scientists at a quarry in Caroline County, Virginia. It is the oldest known member of the group of whales that includes the fin whales. The best known fin whale is the Blue whale, the largest creature that has ever lived.

Stromatolite
An exhibit featuring a 500-million-year-old stromatolite specimen is also on display in the Hall of Ancient Life. The stromatolite, which measures 6 feet in diameter and weighs over 2 tons, garnered national attention after its discovery in May 2008 at the Boxley Blue Ridge Quarry in Roanoke, Virginia. While moving a pile of loose rock, quarry employees noticed the mysterious object, but were unable to identify it. When the quarry’s geologist identified it as a stromatolite, museum scientists were asked to confirm the analysis. When they arrived to the quarry, not only did they confirm it as a stromatolite, but it was found to be one of the most complete stromatolite specimens in the world. Although fragments and sections of stromatolites are fairly common, it is very rare for a whole stromatolite head to be collected intact. This specimen is particularly unusual because the top surface of the head is very well preserved.

Scientific Labs
Exciting research is continuously conducted inside the museum's scientific labs and visitors to the museum can witness this research first-hand by looking through windows into the VMNH paleontology and archaeology labs from The Harvest Foundation Hall of Ancient Life. Additionally, visitors might get the opportunity to watch a museum curator make copies of fossils or artifacts using the museum's 3D printer.