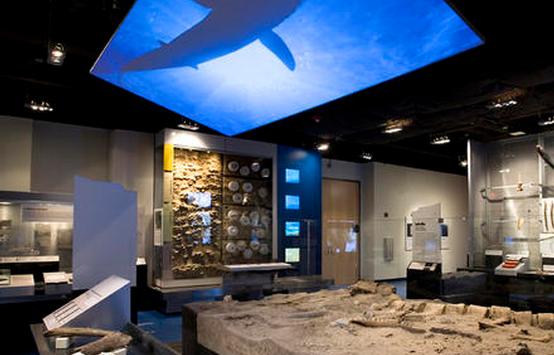 Walk through Virginia's natural history from beginning to present inside the museum's Uncovering Virginia exhibit gallery. The exhibit features recreations of six research sites in Virginia where VMNH scientists and their colleagues have worked or are working.  Virginia's rich natural and geological history provides a range of locations around the Commonwealth that span a broad interval of time from 700 million years ago to 300 years ago. Each research site within the exhibit features the site as it is today; a lab experience where visitors can examine fossil or archaeological evidence, while using the same tools as scientists to interpret that evidence; and video animations that brings to life the animals and plants that were alive at that time and in at that place.

Grundy, Buchanan County (300 mya)
Plants and animals that lived and died in tropical swamps are preserved as coal. This display is a recreation of a present day coal mine, with the coal seams, the tracks for the coal cars and mine shaft. However with the push of a button the visitor is transformed to the past.  The diorama, which appears when the lights change, depicts life in Virginia around 300 million years ago when Virginia was just south of the equator. At that time, flowering plants had not yet evolved, and club mosses were the size of oak trees.  The video depiction of life 300 million years ago features giant cockroaches, a giant dragonfly, a giant centipede-like animal, and a primitive amphibian that looks like a giant salamander.

Solite Quarry, Pittsylvania County (225 mya)
The Solite quarry is the only locality anywhere in the world with numerous complete insect fossils from this time period (the Triassic). Many of the Solite insects closely resemble their modern counterparts, and this site is famous for having the oldest records for many living insect families and orders.  This was once the site of a lake, and today numerous animal and plant fossils are preserved in layers of shale. These layers are represented in the exhibit by part of the quarry face.  The vertebrate fossils are often the same color as the rock, and they can’t be easily separated from the sediment, so Dr. Nick Fraser, who works at this site, uses a CT scanner to examine the fossils. CT is an abbreviation for Computed Tomography. Physicians use CT scans to create 3-dimensional images so they can diagnose problems with brains and other organs and blood vessels. The lab experience for Solite includes an interactive where visitors can scan through the rock to pick out details of a fossil of a gliding reptile that Dr. Fraser found at Solite.

Carmel Church - Caroline County (14 mya)
At this site, many fossils of marine animals (whales, sharks, turtles, crocodiles, seals) that lived 14 million years ago have been found. It also includes remains of several land mammals (horses, peccaries, tapirs), which indicates that the deposit was close to the ancient shoreline.Dr. Alton Dooley, associate curator of paleontology, is still actively excavating this locality, which is probably the largest  accumulation of fossil bones east of the Mississippi River. A replica of the biggest whale found here is suspended from the ceiling of the Harvest Foundation of the Piedmont Great Hall.  This exhibit includes a replica of part of the bone bed from the Carmel Church quarry, with an interactive video. As visitors scroll across images of fossils in the bone bed on the monitor, the screen displays information about the fossils. For some of the animals, a restoration in silhouette appears to swim on the screen overhead.

Chippokes, Surry County (9 to 3 mya)
At this site, the James River has cut through the ground, exposing different layers of shells. The oldest layer is at the bottom and was deposited about 9 million years ago. The youngest is at the top of the cliff face and was laid down about 3 million years ago.  The layers have different kinds of animals and different amounts of animals – Mollusks are particularly well represented. The layers with the most animals are evidence that the water was warmer and more tropical. The layers that have fewer animals indicate times when the climate was more temperate, like it is today.  This portion of the exhibit is sponsored by Kitty Sue and Clyde Hooker.

Saltville, Smyth County (14,000 years ago)
This exhibit documents a period during the Ice Age in Virginia. Animals such as muskox and caribou lived at Saltville during the Ice Age. Because these animals are found today in the Arctic Circle, we know that Saltville’s climate was colder and drier then than it is today. Fossils of other large mammals including mastodons and mammoths have also been found at Saltville. These animals became extinct at the end of the Ice Age about 10,000 years ago.  This portion of the exhibit is sponsored by Stanley Furniture.

Graham-White, Salem (500 and 300 years ago)
The exhibit is named for a company called Graham-White, which provided some of the funding for the Department of Historic Resources to excavate the site near the Roanoke River for a soccer field. When archaeologists found artifacts that were 300 years old, they kept digging and eventually found additional artifacts.

This is an unusual archaeological site, because the same people occupied the same place, but over a fairly short time frame spanning only about 150 years. Because of the age of the site and the fact that European goods were found at the second occupation, the Graham-White location has evidence of Native Americans and their ways of life both before and after contact with Europeans. We can therefore glean information on how European contact affected the way of life of these native people.The evidence is mostly from trash pits. For archaeologists, trash is treasure. Some of the things the Indians did changed over time, but others didn’t change at all. Trade goods, like pottery and beads, change and tell us that the Indians changed their trading patterns from the southeast to the east and northeast. On the other hand, the tools the Indians used to scrape deer hides were the same before and after contact. They had a good technique for preparing deer hides, so there was no need to change.  This portion of the exhibit is sponsored by Bassett Furniture.