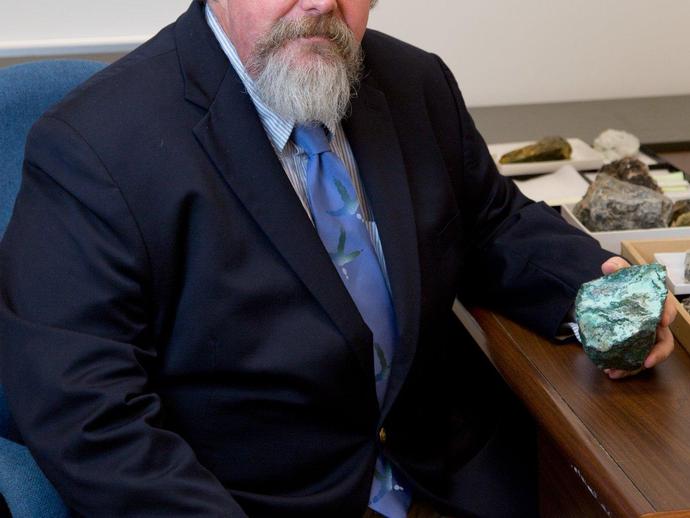 It's an end of an era at VMNH

It's an end of an era at VMNH. Dr. James S. Beard, senior curator of earth sciences and museum icon, is retiring from VMNH today after more than 30 years of exceptional service to the museum and the Commonwealth of Virginia. Dr. Beard began his career at the museum in 1989 and retires as the longest tenured curator in the history of the museum. Despite his retirement, Dr. Beard will remain a mainstay at the museum for years to come, as he plans to continue his research and collaborations with colleagues at the museum and throughout the scientific community. Congratulations on your retirement, Dr. Beard, and we look forward to your continued presence here at VMNH! More details regarding Dr. Beard's retirement and his ... 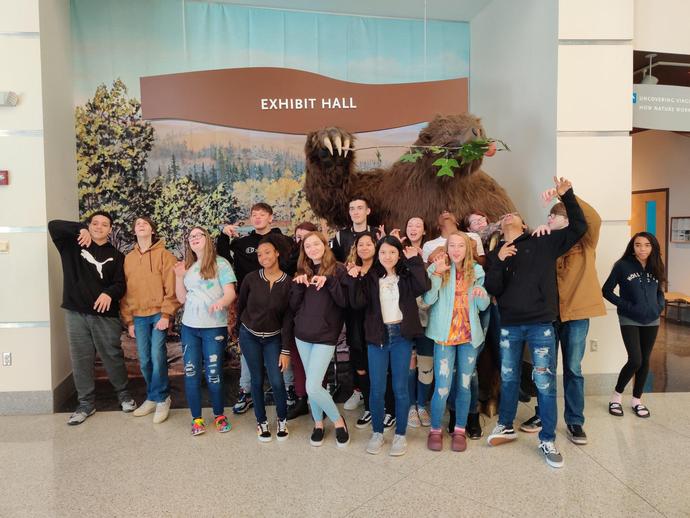 Fun day at VMNH! 8th graders from Fieldale-Collinsville Middle School visited the museum today for an exhibit scavenger hunt, a meet-and-greet with some of the museum's resident live animals, and to participate in the "We're All in a Watershed" classroom program! 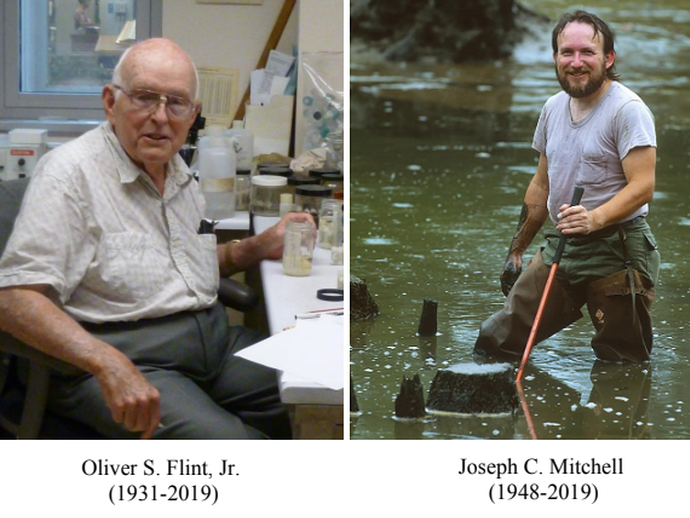 The museum and the scientific community lost two tremendous colleagues in 2019. Dr. Oliver ("Ollie") Simeon Flint, Jr. was a former VMNH Senior Research Fellow, former VMNH Trustee, and a world renowned expert on caddisflies. Dr. Joseph ("Joe") Calvin Mitchell, was a former VMNH Research Associate and widely regarded as the leading expert on the herpetofauna of Virginia. The lives and careers of these two great colleagues were highlighted in a recent issue of Banisteria, the semiannual journal of the Virginia Natural History Society. Excerpts from Banisteria highlighting their lives can be found at www.vmnh.net/flint-mitchell. 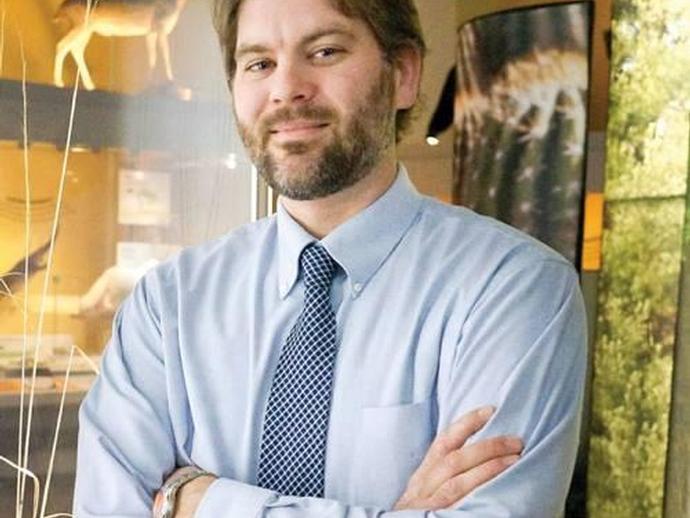 Congratulations to VMNH Deputy Director Ryan Barber for being re-appointed to the Marketing ...

Congratulations to VMNH Deputy Director Ryan Barber for being re-appointed to the Marketing, Awards & Communications Committee, as well as the U.S. Government Relations Committee, of the Association of Fundraising Professionals (AFP)! 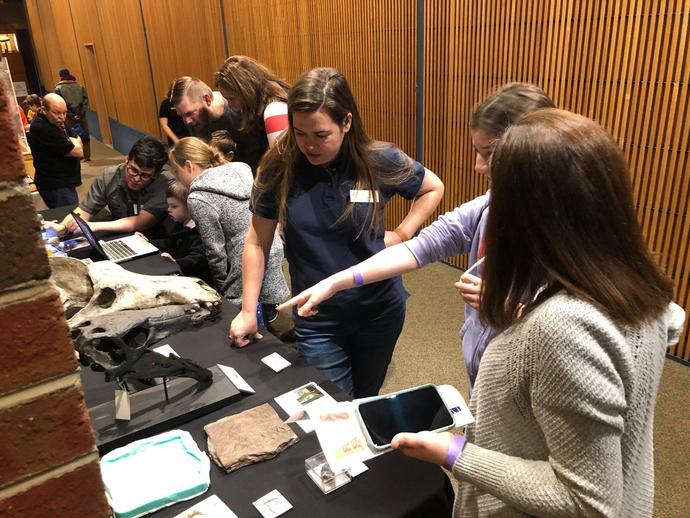 Several members of the museum's Research & Collections team spent the day in Gastonia, N.C. for the Schiele Museum's annual Fossil Fair! The crew showed-off a variety of fossils and specimens from the VMNH paleontology collections. 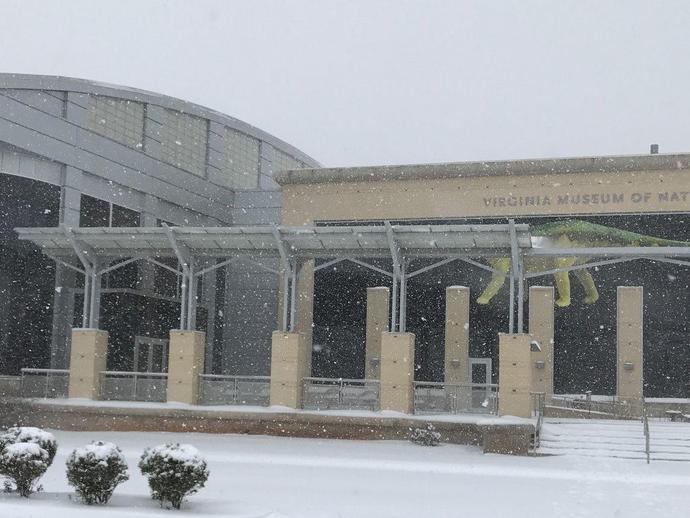 Due to winter weather, the museum will open to visitors at 10 a

Due to winter weather, the museum will open to visitors at 10 a.m. on Friday, February 21. We will announce any additional schedule changes here on the museum's Facebook page and the museum website at www.vmnh.net. If you are planning to visit the museum, please confirm hours before traveling. 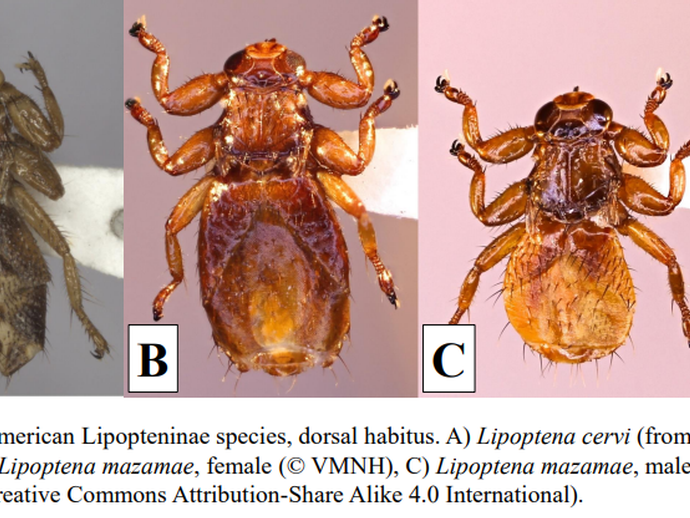 What's a deer ked? It isn't a new line of shoes for wildlife; in fact, it's a blood-sucking parasite that resembles a tick, but it is actually a type of fly. Upon finding a suitable host, the fly tears its wings off and it spends the rest of its life on the host. A paper concerning the very first records of the neotropical deer ked Lipoptena mazamae was just published in Banisteria, the official publication of the Virginia Natural History Society. The paper was written by VMNH Research Technician Liberty Hightower; Curator of Mammalogy Dr. Nancy Moncrief; and Associate Curator of Invertebrate Zoology Dr. Kal Ivanov. 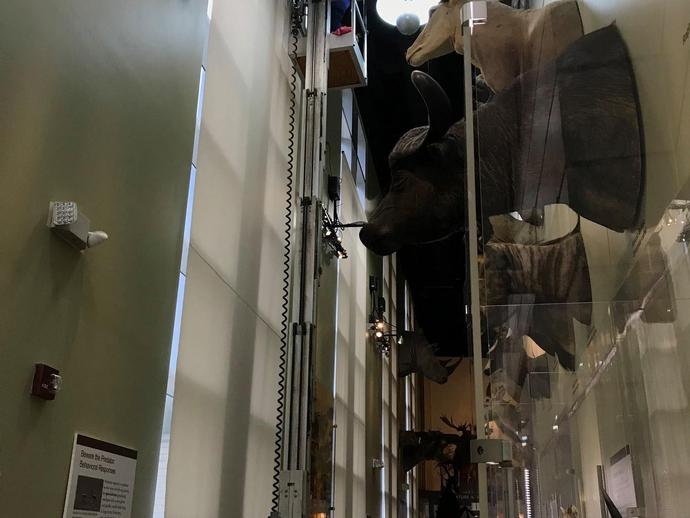 Whatcha doin' way up there, Haley?

Whatcha doin' way up there, Haley? Haley Cartmell, VMNH collections manager, broke out the industrial lift to remove a few pests from the windowsills inside the Hahn Hall of Biodiversity today. Keeping a museum free of insects is a never-ending battle, but it's essential in protecting museum specimens from being damaged or destroyed. 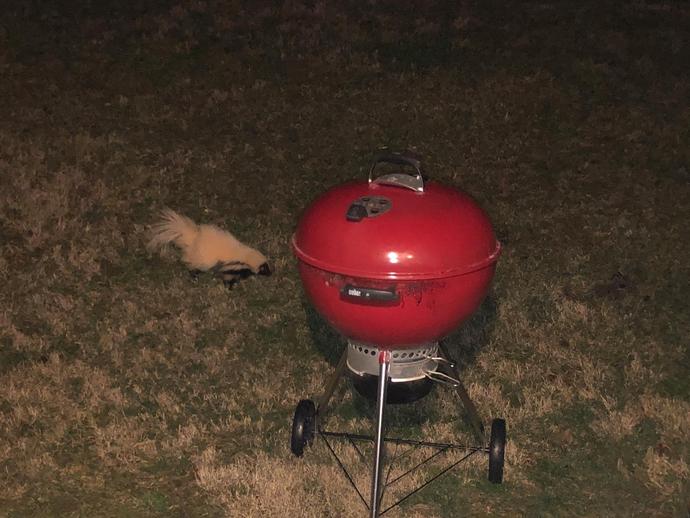 Administrator of Science Ben R. Williams experienced some insomnia early Wednesday morning, which led to him spying this mostly white striped skunk (Mephitis mephitis) in his backyard. As nocturnal animals, skunks are mostly active at night, and this one was too busy rooting around for delicious insects to pay any mind to the nearby photographer. It's not clear how uncommon it is to spot a mostly white striped skunk, but these skunks have been documented to display considerable variation in their coat color and pattern.

"How did the European starling make it to Virginia?

"How did the European starling make it to Virginia? You can thank – actually, blame – a pharmacist named Eugene Schieffelin and a playwright named William Shakespeare." 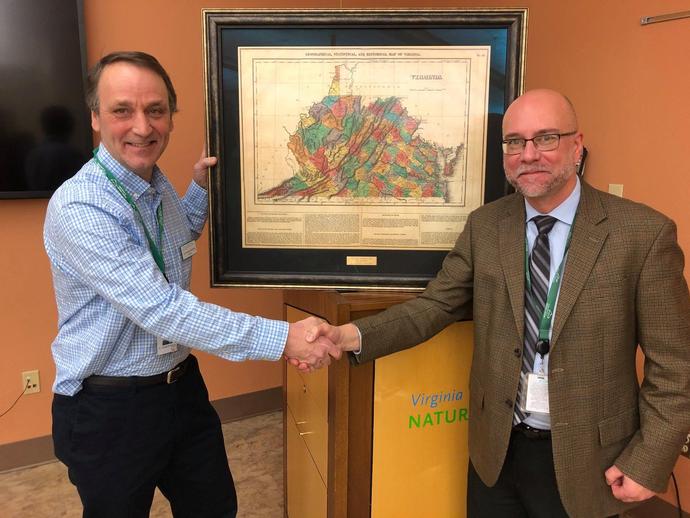 Congratulations, Dr. Keiper, for 10 years of exceptional service as executive director of the Virginia Museum of Natural History! In recognition of his service, Dr. Thomas R. Benzing (left), chairman of the Virginia Museum of Natural History Board of Trustees, presented Dr. Keiper with a certificate and a historical map of Virginia from 1855 today at the museum. Thank you, Dr. Keiper, for all you have done for the museum this past decade! 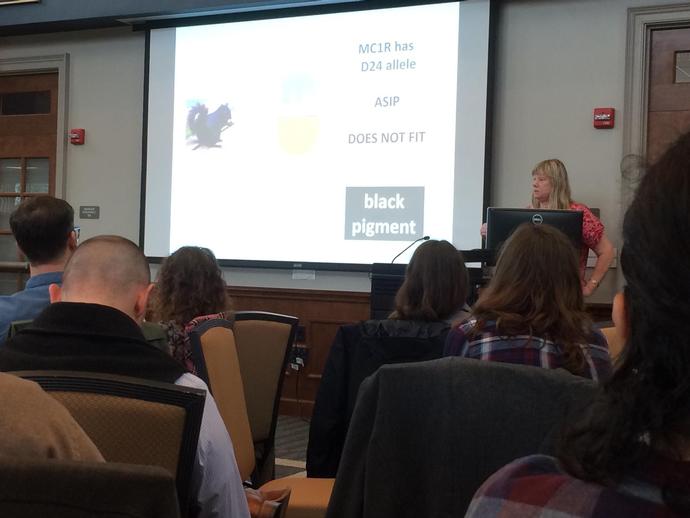 Dr. Nancy Moncrief, curator of mammalogy, and Liberty Hightower, research technician, participated in the 2020 Annual Meeting of the Virginia Chapter of The Wildlife Society last week at Randolph-Macon College in Ashland. The meeting provided an opportunity for members to gather and discuss ongoing projects, wildlife issues, and network. Dr. Moncrief conducted a 15 minute professional presentation titled "Genetics of melanism in Eastern gray squirrels and Eastern fox squirrels". During the presentation, Dr. Moncrief discussed her work examining melanism (fur that is all black) in gray squirrels and fox squirrels. Dr. Moncrief recently co-wrote a scientific paper examining the link between genetics and coat color in ...

Although the museum was not part of the recent scientific study regarding bumblebee population ...

Episode 34 of the PASTTIME podcast is now available!

Episode 34 of the PASTTIME podcast is now available! In this episode, the PASTTIME hosts focus on ancient, insect-like marine animals called trilobites and how new fossils show that they actually gathered together and migrated. PASTTIME is co-hosted by Dr. Adam Pritchard, assistant curator of paleontology at VMNH, and Dr. Matt Borths, curator of the Duke University Lemur Center's Division of Fossil Primates. The podcast explores how we know what we know about the past. There's a special focus on the fossil record, but delving into the story of the past isn't limited to dry bones. Today's paleontologists use techniques drawn from other sciences including physics, chemistry, geology, and biology to figure out what ... 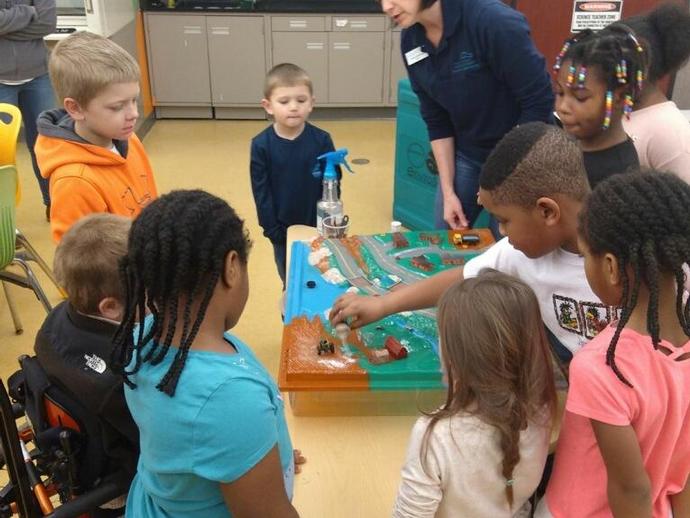 Saturday was a fun day at the museum!

Saturday was a fun day at the museum! Pre-K - 5th graders from Bacon District Elementary toured the exhibit galleries and participated in the "We're All In a Watershed" educational program led by VMNH educators! Also, Boy Scouts Pack 145 woke up among the dinosaurs inside the Hall of Ancient Life after participating in the "Mad Scientist" sleepover program Friday evening!

In case you missed it

In case you missed it... "Just released first images from the National Science Foundation's Daniel K. Inouye Solar Telescope reveal unprecedented detail of the sun's surface and preview the world-class products to come from this preeminent 4-meter solar telescope. NSF's Inouye Solar Telescope, on the summit of Haleakala, Maui, in Hawai'i, will enable a new era of solar science and a leap forward in understanding the sun and its impacts on our planet." Image Credit: NSO/AURA/NSF 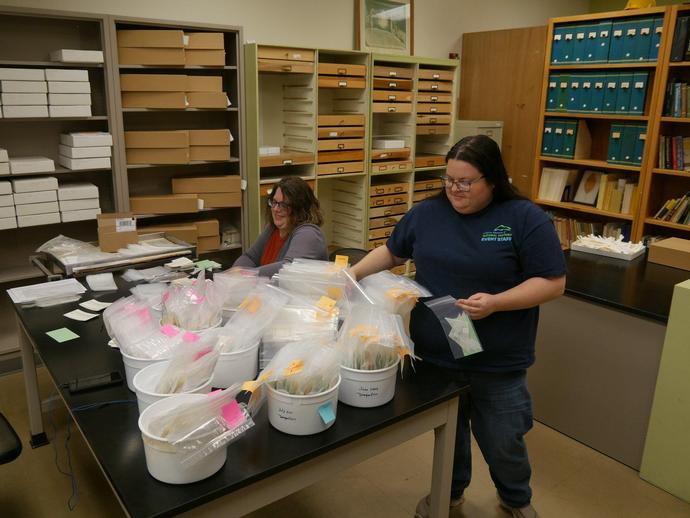